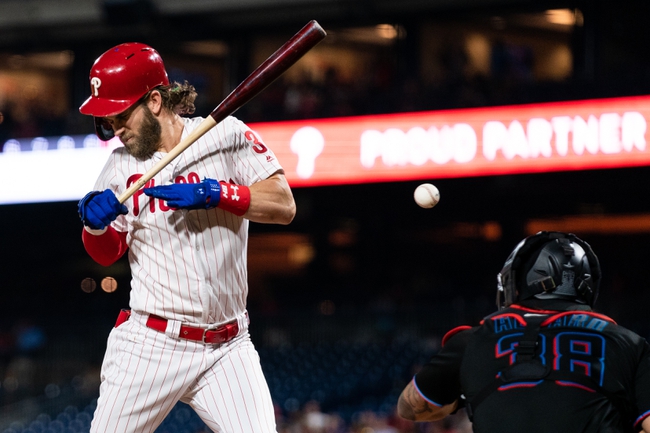 The Miami Marlins and the Philadelphia Phillies meet in their regular season finale from Citizens Bank Park on Sunday.

The Miami Marlins will look to finish a frustrating season on a high note after losing the first two games of the series with a 9-3 loss in game two on Saturday. Neil Walker had a home run and two RBIs while Starlin Castro had an RBI to finish off Miami’s scoring as a team in the loss. Harold Ramirez added a triple and Jorge Alfaro chipped in a double while Jon Berti, Miguel Rojas and Austin Dean each had a base hit. Caleb Smith took the loss, falling to 10-11 on the year after allowing six runs, five earned, on five hits while walking four over three innings of work. Sandy Alcantara will start game three and is 5-14 with a 3.95 ERA and 146 strikeouts this season. In his career, Alcantara is 2-1 with a 3.20 ERA and 18 strikeouts against Philadelphia.

The Philadelphia Phillies will look to finish the year above .500 and complete the season with a sweep after their game two victory on Saturday. Bryce Harper had a home run and three RBIs while Maikel Franco and Adam Haseley each had two RBIs with Franco belting a home run. Cesar Hernandez added a solo home run and Deivy Grullon had a double and an RBI to cap off Philly’s scoring as a team in the winning effort. Zach Eflin got the win to improve to 10-13 on the year after allowing three runs on six hits while striking out six over 7.2 innings of work. The Phillies did not have a starting pitcher announced at the time of posting.

I’d like to make a case for the Marlins as Alcantara threw 7.2 innings of one run ball at Citizens Bank Park this season. However, Alcantara’s record isn’t good on the road, and if the Phillies had played the way they are now over the last couple of weeks, this could be a completely different conversation about the postseason. I’ll side with Philadelphia to finish the year on a high note with a win here.