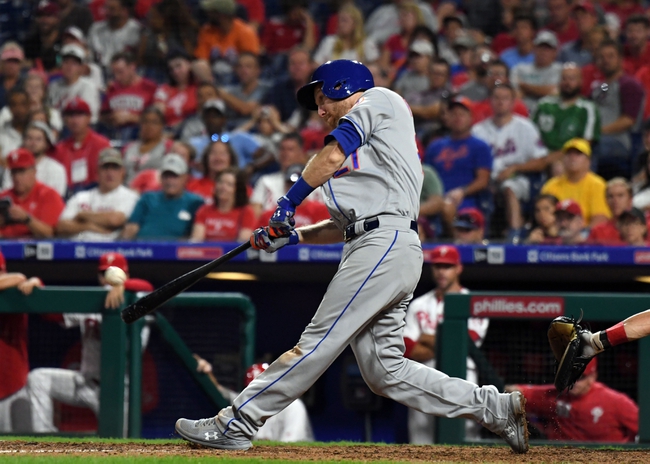 TV: FS-1, SNY Stream the MLB Game of the Day all season on ESPN+. Sign up now!

The New York Mets and the Philadelphia Phillies meet in game two of their three game NL East division set in MLB action from Citizens Bank Park on Saturday.

The New York Mets will look to build some momentum after snapping their six game losing streak with an 11-5 series opening win on Friday. Todd Frazier went 2 for 4 with a pair of home runs and six RBIs while Michael Conforto went 3 for 5 with a home run, a double and two RBIs. Amed Rosario also added two RBIs while Wilson Ramos chipped in an RBI to cap off the Mets’ scoring as a team in the win. Pete Alonso went 3 for 5 at the plate while Joe Panik went 2 for 4 with a double to round out the Mets’ offense. Zack Wheeler allowed one run on seven hits while walking three and striking out four over six innings of work, not factoring in the decision. Justin Wilson got the win in relief to improve to 4-1 on the year. Steven Matz will start game two and is 8-8 with a 4.06 ERA and 122 strikeouts this season. In his career, Matz is 1-4 with a 6.15 ERA and 25 strikeouts against Philadelphia.

The Philadelphia Phillies will look to rebound after starting the series with a disappointing loss on Friday. J.T. Realmuto had two RBIs while Corey Dickerson, Bryce Harper and Rhys Hoskins each had an RBI to finish off Philly’s scoring in the win with Dickerson going 3 for 4 while Hoskins added three hits with a double and Harper added a double of his own. Adam Haseley went 2 for 3 at the dish while Aaron Nola and Jean Segura each contributed a two-bagger as well. Cesar Hernandez chipped in a base hit of his own to finish off the Phillies’ offense in the loss. Nola allowed one run on four hits while striking out seven over 6.1 innings of work, not factoring in the decision. Mike Morin took the loss, falling to 1-1 on the year in relief. Jason Vargas will start game two and is 6-6 with a 4.09 ERA and 96 strikeouts this season. In his career, Vargas is 0-1 with an 8.31 ERA and 13 strikeouts against the Mets.

I think you could honestly make a case for either side, as the Mets know what Vargas throws from his brief time with the team and Vargas has had some issues in a small sample size against the Mets. On the other hand, Philly has had their way as well with Matz, who has also been brutal on the road this season with an ERA over six and he’s been dealing with a blister issue lately. I’m not a fan of either starter, which is why I’m going to side with the over. Both offenses are capable of producing some runs, so I’ll bank on seeing a double-digit total when all is said and done here.