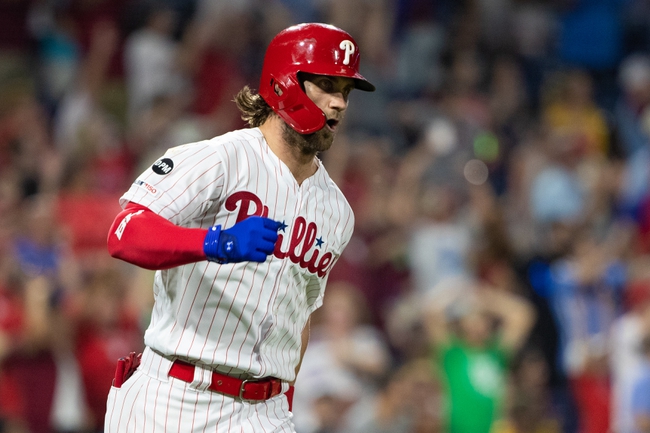 TV: FS-San Diego Stream the MLB Game of the Day all season on ESPN+. Sign up now!

The San Diego Padres and the Philadelphia Phillies meet in game two of their three game set in MLB action from Citizens Bank Park on Saturday.

The San Diego Padres will look to rebound after suffering an 8-4 defeat in the series opener for their fourth loss in their last five games. Francisco Mejia went 2 for 3 with a triple and an RBI and Eric Hosmer had a double with an RBI and Wil Myers added an RBI as well in the defeat. Josh Naylor went 3 for 4 with a double while Manny Machado added a base hit as well as the Padres knocked out seven hits as a team in the loss. Chris Paddack took the loss, falling to 7-6 on the year after allowing five runs, four earned, on nine hits while striking out six over 4.2 innings of work. Dinelson Lamet will start game two and is 1-2 with a 3.86 ERA and 49 strikeouts this season. This will be Lamet’s second career start against Philadelphia.

The Philadelphia Phillies will look to keep the momentum going after a series opening win on Friday. Bryce Harper went 2 for 5 with a home run and three RBIs while J.T. Realmuto had a home run, a double and two RBIs. Roman Quinn added a solo home run while Cesar Hernandez added an RBI as well in the victory. Logan Morrison and Jean Segura each went 2 for 4 with Morrison adding a double while Vince Velasquez added a base knock of his own in the victory. Velasquez got the win on the mound, allowing three runs on five hits while striking out five over 5.1 innings of work. Zach Eflin will start game two and is 7-11 with a 4.49 ERA and 99 strikeouts this season. This will be Eflin’s second career start against the Padres.

This may be San Diego’s best chance to steal a game in this series as Eflin’s been more than hittable with an 11.88 ERA in the month of July, resulting in a demotion to the bullpen. However, Eflin’s responded by allowing just one run in just under five innings of work, and the Phillies are the team in much better form right now and also need to keep winning games to keep pace in the NL playoff hunt. I’ll take the team in better form at near even money and the Phillies on Saturday.