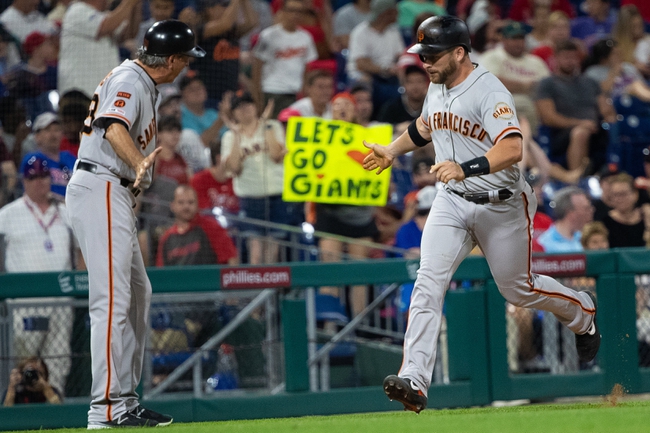 The San Francisco Giants and the Philadelphia Phillies meet in game two of their three game set in MLB action from Citizens Bank Park on Wednesday.

The San Francisco Giants will look to bounce back after dropping game one on Tuesday by a final score of 4-2. Brandon Belt and Stephen Vogt each had a solo home run to make up the two Giant runs in the losing effort while Donovan Solano, Mike Yastrzemski, Kevin Pillar and Tyler Austin each had a base knock as well as the Giants cranked out just six hits as a team in defeat. Tyler Beede took the loss, falling to 3-5 on the year after allowing four runs on ten hits while striking out four over five innings of work. Jeff Samardzija will start game two and is 7-8 with a 3.95 ERA and 102 strikeouts this season. In his career, Samardzija is 2-5 with an 8.51 ERA and 35 strikeouts against Philadelphia.

The Philadelphia Phillies will look to keep the ball rolling after their series opening win on Tuesday. Rhys Hoskins had a home run and two RBIs while Adam Haseley went 2 for 4 with a double and an RBI and Maikel Franco added an RBI as well to cap off Philadelphia’s scoring as a team in the win. Jean Segura went 3 for 5 with a double while J.T. Realmuto and Cesar Hernandez each went 2 for 4 to round out Philly’s offense in the victory. Drew Smyly got the win to improve to 1-0 on the year after tossing seven shutout innings, giving up just four hits while striking out five. Hector Neris closed out the 9th for his 19th save of the season. Vince Velasquez will start game two and is 3-5 with a 4.46 ERA and 79 strikeouts this season. In his career, Velasquez is 1-1 with a 3.12 ERA and 27 strikeouts against San Francisco.

Philadelphia being favored at home makes sense after Tuesday’s performance and the fact that the Phillies have a bit more to play for with the division lead still within reach while San Francisco is 15 games out of the division lead and can only make a wild card push at this point. However, the Giants are still one of the league’s hotter teams in the second half and have been playing some solid baseball since the beginning of the month. Samardzija has also allowed just five runs in his last three road starts covering 19.2 innings, and five of his seven wins on the year have come on the road. I just don’t have a good feel for Velasquez, and San Francisco has done a good job bouncing back lately, so I’ll take a shot with San Francisco and the plus money here.