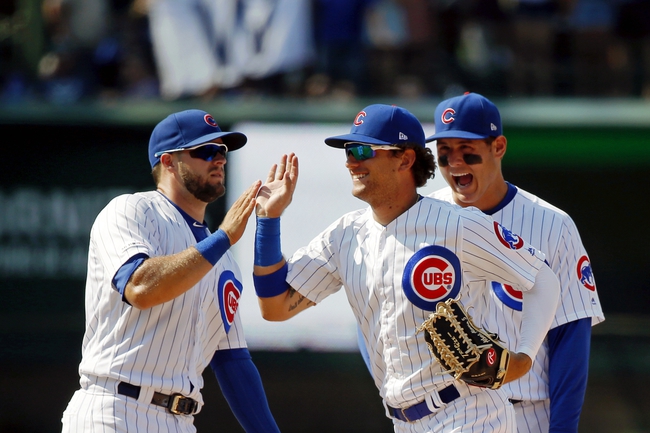 The Chicago Cubs and the Pittsburgh Pirates meet in game one of a three game NL Central division set from PNC Park in MLB action on Friday.

The Chicago Cubs will look to bounce back after being swept by Philadelphia including a 7-5 loss in Thursday’s series finale. Anthony Rizzo went 2 for 5 with a home run and two RBIs, while Kyle Schwarber had a solo home run and David Bote had a double and an RBI. Albert Almora Jr. had an RBI as well to round out Chicago’s scoring as a team in the loss while Ian Happ had a triple and Nick Castellanos had a double while going 2 for 3 at the dish. Victor Caratini added a base hit to sum up the Cubs’ offense in the defeat. Yu Darvish threw seven shutout innings, giving up just four hits while striking out ten, not factoring in the decision. Derek Holland took the loss, falling to 2-5 on the year in relief. Kyle Hendricks will start game one and is 8-9 with a 3.48 ERA and 114 strikeouts this season. In his career, Hendricks is 4-6 with a 3.25 ERA and 65 strikeouts against Pittsburgh.

The Pittsburgh Pirates will look to rebound after failing to complete the sweep of the Angels with a 7-4 loss in Wednesday’s series finale. Melky Cabrera and Elias Diaz each had an RBI while Kevin Newman had a triple. Starling Marte and Colin Moran each added a base hit as well as the Pirates had just six hits as a team in the losing effort. Chris Archer took the loss, falling to 3-9 on the year after allowing four runs, three earned, on five hits while striking out ten over five innings of work. Joe Musgrove will start game one and is 8-11 with a 4.71 ERA and 115 strikeouts this season. In his career, Musgrove is 2-2 with a 1.23 ERA and 27 strikeouts against the Cubs.

You have a Cubs team that can’t win on the road going against a Pirates team that has a hard time winning period, so I’m really not trying to get behind either of these teams in this matchup. Chicago is probably the more likely of the two to rebound, but Musgrove has allowed just four earned runs in 29.1 career innings against the Cubs. The issue there is that Musgrove has also allowed 14 runs, 13 earned, across 8.1 innings in his last two starts at home. On the other hand, Hendricks is fresh off of a start in which he yielded seven runs in less than four full innings on the road. I think both teams can get to the other team’s starter, so I’ll side with the over here.