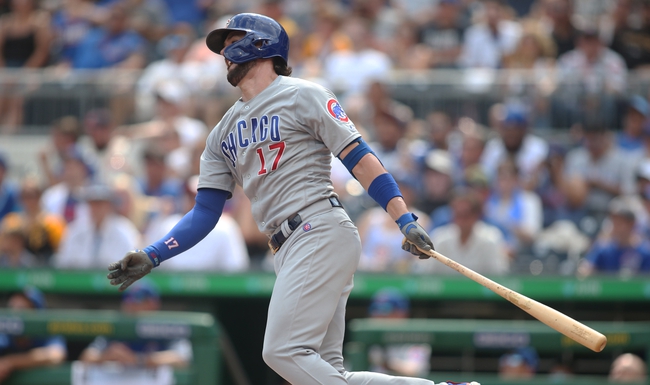 The Chicago Cubs and the Pittsburgh Pirates meet in the rubber match of their three game NL Central division set in this week’s installment of Sunday Night Baseball.

The Chicago Cubs will look to win the set after taking game two on Saturday by a final score of 2-0. Kris Bryant had a solo home run while Addison Russell, Ian Happ and Jonathan Lucroy each had base hits as the Cubbies cranked out just four hits as a team in the winning effort. Jon Lester got the win to improve his record to 10-8 on the year after giving up just four hits while walking five and striking out three over six shutout innings. Rowan Wick closed out the 9th for his 1st save. Jose Quintana will start game three and is 10-7 with a 4.11 ERA and 124 strikeouts this season. In his career, Quintana is 4-1 with a 2.81 ERA and 50 strikeouts against Pittsburgh.

The Pittsburgh Pirates will look to rebound to take the series after dropping game two on Saturday. Adam Frazier had a double while Starling Marte, Kevin Newman and Elias Diaz each had a base hit as Pittsburgh also had four hits as a team in the loss with the rest of the team going 0 for 19 with 3 strikeouts. Steven Brault took the loss, falling to 3-2 on the year after allowing one run on two hits while striking out eight over seven innings of work. Mitch Keller will start game three and is 1-1 with a 7.94 ERA and 19 strikeouts this season. This will be Keller’s first career start against the Cubs.

The plus money with Pittsburgh would be worth a look, but Keller is still young in his career, and still has to prove that he’s capable of handling the big boys despite a solid start on the road last time out. This is a hefty price for the Cubs on the road given their struggles away from Wrigley, but Quintana has been rolling, giving up one earned in back-to-back starts while striking out 21 over that short span. Quintana also hasn’t taken a loss in any of his last eight starts dating back to late-May. The Cubs need this game way more than Pittsburgh does, so I’ll lay the juice with the Cubs on the road behind another strong start from Quintana.