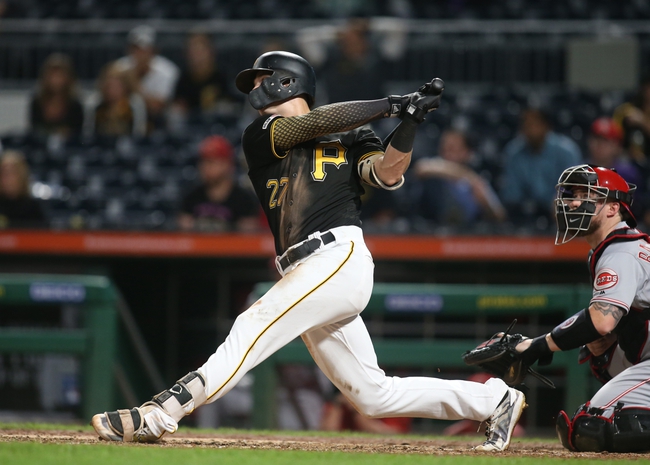 TV: FS-Ohio Stream the MLB Game of the Day all season on ESPN+. Sign up now!

The Cincinnati Reds and the Pittsburgh Pirates meet in game two of their three game NL Central division set in MLB action from PNC Park on Saturday.

The Cincinnati Reds will look to bounce back and snap a five game losing streak after a 6-5 loss in Friday’s series opener. Phillip Ervin had two RBIs while Jose Iglesias and Michael Lorenzen each had an RBI in the losing effort. Jose Peraza went 2 for 5 with a double while Curt Casali and Aristides Aquino added a two-bagger as well in the loss. Anthony DeSclafani gave up four runs, three earned, on eight hits while striking out five over five innings of work, not factoring in the decision. Raisel Iglesias took the loss in relief, falling to 3-12 on the year as a result. Lucas Sims will start game two and is 2-1 with a 4.39 ERA and 56 strikeouts this season. This will be Sims’ second career start against Pittsburgh.

The Pittsburgh Pirates will look to keep their momentum going after winning four in a row with Friday’s series opening win. Kevin Newman had a pair of home runs and five RBIs while Jacob Stallings, Jake Elmore and Erik Gonzalez each went 2 for 4 at the dish in the win. Kevin Kramer and Steven Brault each had a base hit to finish off Pittsburgh’s offense as a team in the win. Brault gave up four runs on four hits while walking four and striking out ten over five innings of work, not factoring in the decision. Yacksel Rios got the win to improve to 1-0 on the year as a result. James Marvel will start game two and is 0-3 with a 10.22 ERA and 7 strikeouts this season. This will be Marvel’s first career start against Cincinnati.

I’d like to make a case for Pittsburgh here because they’ve been playing the better baseball this week, but it’s hard because Marvel’s been lit up like a Christmas tree in his first three career starts. Granted, his best start came in his major league debut which was also his lone start at home, but he’s allowed 12 runs in his last 7.1 innings of work and to make matters worse, in three starts, the Pirates have given Marvel just two runs of support. Sims won’t go deep and this is probably a bullpen game for the Reds, but I just think that the offense is more likely to get to Marvel than Pittsburgh’s is to get to Cincinnati’s arms, so I’ll side with Cincinnati for a bounce back win here.