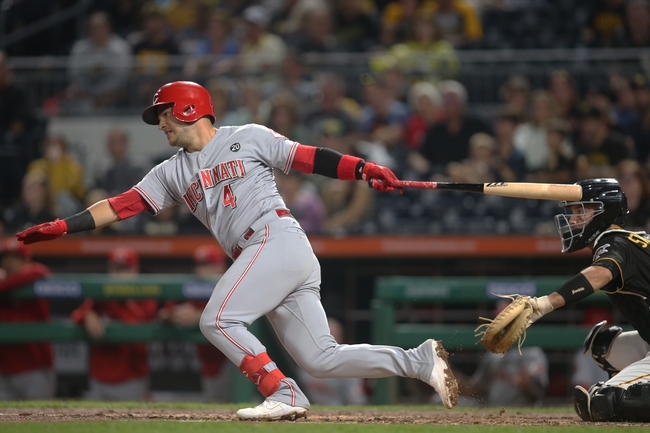 The Cincinnati Reds and the Pittsburgh Pirates meet in their regular season finale from PNC Park on Sunday.

The Cincinnati Reds will look to finish strong after evening the series up at one win apiece following a 4-2 win in game two on Saturday. Jose Iglesias had a double and two RBIs while going 3 for 4 at the dish while Tucker Barnhart had a solo home run and R.J. Alaniz added an RBI to cap off Cincinnati’s scoring. Brian O’Grady had a pair of doubles while Jose Peraza, Eugenio Suarez and Phillip Ervin each had a two-bagger as well. Michael Lorenzen and Kyle Farmer each had a base hit to finish off the Reds’ offense as a team in the win. Alaniz got the win in relief to improve his record to 1-0 on the year. Trevor Bauer will start game three and is 11-13 with a 4.48 ERA and 253 strikeouts this season. In his career, Bauer is 2-1 with a 4.96 ERA and 15 strikeouts against Pittsburgh.

The Pittsburgh Pirates will look to finish the year on a high note as well after dropping game two on Saturday. Steven Baron had a double and an RBI while Adam Frazier added a two-bagger of his own. Alex McRae, Kevin Newman and Jose Osuna each had a base hit to finish off Pittsburgh’s offense as the Pirates cranked out just five hits as a team in the losing effort. James Marvel gave up two runs on six hits over five innings of work, not factoring in the decision, while McRae took the loss in relief to fall to 0-4 on the year. Trevor Williams will start game three and is 7-8 with a 5.52 ERA and 108 strikeouts this season. In his career, Williams is 5-1 with a 2.98 ERA and 37 strikeouts against Cincinnati.

This line baffles me even though both teams are missing the playoffs. Bauer hasn’t been good since coming to Cincinnati, especially on the road where he owns an 8.31 ERA through six starts, including allowing eight runs, seven earned, in three innings in his lone start at PNC Park in a Reds uniform. Williams has had his moment, and has an ERA just under six at home this season, but he threw six shutout innings at home against these same Reds last month and has had solid numbers against Cincinnati in his career. I just think the wrong team is favored in this one, so I’ll take Pittsburgh and the plus money here.