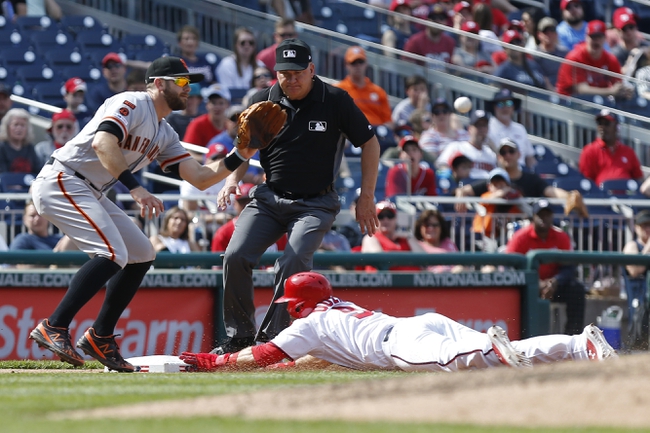 The Washington Nationals and the San Francisco Giants meet in game one of a three game set in MLB action from Oracle Park on Monday night.

The Washington Nationals will look to rebound after losing their series with Philadelphia, dropping Sunday’s rubber match by a final count of 7-5. Gerardo Parra went 2 for 3 with a home run and two RBIs while Brian Dozier went 2 for 4 with a solo home run. Anthony Rendon had an RBI as well while Trea Turner went 2 for 5 at the dish. Matt Adams and Andrew Stevenson each had a base hit to cap off Washington’s offense as a team in the loss. Patrick Corbin gave up five runs on seven hits while walking three and striking out five over 5.1 innings of work, not factoring in the decision. Wander Suero took the loss, falling to 3-6 on the year. Erick Fedde will start the opener and is 1-2 with a 4.67 ERA and 30 strikeouts this season. This will be Fedde’s first career start against San Francisco.

The San Francisco Giants will also look to bounce back after losing their series with Colorado, dropping Sunday’s series finale by a final score of 6-2. Donovan Solano had a pair of solo home runs to make up San Francisco’s scoring in the losing effort. Austin Slater, Evan Longoria, Kevin Pillar, Steven Duggar and Joe Panik each had a base hit to cap off the Giants’ offense in the defeat. Tyler Beede gave up five runs on eight hits while striking out three over 3.2 innings of work. Jeff Samardzija will start the opener and is 8-8 with a 3.75 ERA and 107 strikeouts this season. In his career, Samardzija is 2-9 with a 4.80 ERA and 70 strikeouts against Washington.

Neither side is playing all that well right now, and Samardzija has had his struggles against the Nats in his career, so the Nationals could be worth a look. However, Fedde hasn’t been a reliable arm in the majors and is coming off of a start in which he allowed nine runs in just 3.2 innings of work. Samardzija has allowed two runs or less in five of his last six starts and the Giants have won each of those five starts. San Francisco has also done some of their best work during this recent winning stretch at home, so I’ll give the nod to the Giants to draw first blood on Monday.