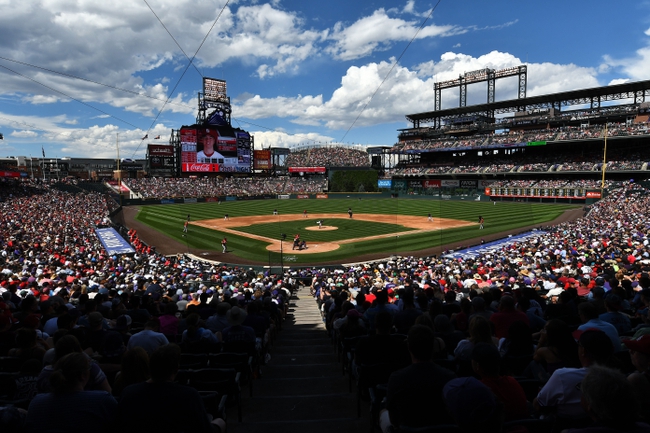 The Colorado Rockies and the St. Louis Cardinals meet in game one of a four game set in MLB action from Busch Stadium on Thursday night.

The Colorado Rockies will look to build some momentum after avoiding a sweep at the hands of Arizona with a 7-2 win in Wednesday’s series finale. Charlie Blackmon and Timothy Melville each had two RBIs while Dom Nunez, Ryan McMahon and Raimel Tapia each had an RBI to finish off Colorado’s scoring as a team in the win with Nunez chipping in a double. Daniel Murphy had a double and Yonathan Daza had two hits while Garrett Hampson, Yonder Alonso and Trevor Story each had base hits as well in the victory. Melville got the win in his debut after allowing one run on two hits while striking out four over seven innings of work. German Marquez will start game one and is 12-5 with a 4.71 ERA and 171 strikeouts this season. In his career, Marquez is 2-0 with a 1.53 ERA and 17 strikeouts against St. Louis.

The St. Louis Cardinals will look to bounce back after failing to sweep the Brewers with a 5-3 loss in Wednesday’s series finale. Dexter Fowler and Yadier Molina each had an RBI with Molina chipping in a double. Kolten Wong, Marcell Ozuna, Paul DeJong and Yairo Munoz each chipped in a hit as the Cards had just six hits as a team in the losing effort. Adam Wainwright allowed five runs on eight hits while walking four to fall to 9-9 on the year with the loss. Miles Mikolas will start the opener and is 7-13 with a 4.30 ERA and 106 strikeouts this season. In his career, Mikolas is 0-0 with a 5.40 ERA and 9 strikeouts against Colorado.

St. Louis and the reasonable price is worth a look given that the Cardinals have been the team playing better baseball of the two since the all-star break over the last month or so. Mikolas has also been solid at home where he has an ERA of 2.43, more than four runs ower than his road ERA of 6.54. However, Mikolas has allowed five runs in back-to-back starts, totalling 11 runs, ten earned, across his last ten innings of work. Marquez is one of many pitchers to have better numbers away from Coors Field and has had a solid sample size in his career against St. Louis. I just think that if Colorado were going to take a game in this series, it’s probably this one, so I’d take a shot with Colorado and the plus money, but otherwise I’m just watching this one.