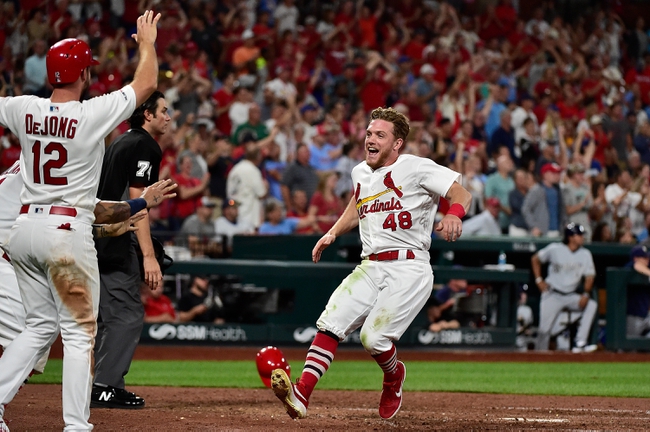 The Milwaukee Brewers and the St. Louis Cardinals meet in the finale of their three game set from Busch Stadium on Wednesday night.

The Milwaukee Brewers will look to salvage a win and avoid the sweep after dropping game two of the series by a final score of 9-4 on Tuesday night. Orlando Arcia had two RBIS while Eric Thames and Hernan Perez each went 2 for 4 with an RBI to finish off Milwaukee’s scoring as a team in the loss. Lorenzo Cain went 3 for 4 at the dish and Ryan Braun had two hits while Christian Yelich and Keston Hiura each contributed a double to round out Milwaukee’s offense in the losing effort. Gio Gonzalez allowed one run on three hits while walking four and striking out six over five innings of work, not factoring in the decision. Jeremy Jeffress ended up with the loss to fall to 3-4 on the year. Adrian Houser will start game three and is 5-5 with a 3.76 ERA and 79 strikeouts this season. This will be Houser’s second career start against St. Louis.

The St. Louis Cardinals will look to complete the sweep after taking game two in decisive fashion on Tuesday. Dexter Fowler had a double and four RBIs while Kolten Wong chipped in two RBIS. Tommy Edman, Yadier Molina and Harrison Bader each had an RBI to finish off St. Louis’ scoring as a team in the win, with Molina going 2 for 3 while Bader added a triple. Marcell Ozuna went 3 for 5 while Paul Goldschmidt and Paul DeJong each had base hits to finish off the Cardinals’ offense as a team in the win. Michael Wacha threw four shutout innings, allowing just three hits with five strikeouts, not factoring in the decision. Tyler Webb picked up the win in relief to improve to 1-1 on the year. Adam Wainwright will start game three and is 9-8 with a 4.33 ERA and 124 strikeouts this season. In his career, Wainwright is 16-9 with a 2.33 ERA and 205 strikeouts against Milwaukee.

I think there’s a case that can be made for Milwaukee, as the Brewers are running out of chances to make up ground in the division and wild card race, and Houser is starting to look more comfortable in a starting role, allowing one run in three of his last four starts. However, the Cardinals are simply playing the better baseball right now, and while he’s had his ups and downs, Wainwright has gotten the better of Milwaukee more often than not in his career, and the Cardinals have played themselves into the division lead right now. I’ll side with the better team at home for the sweep, and that’s St. Louis.