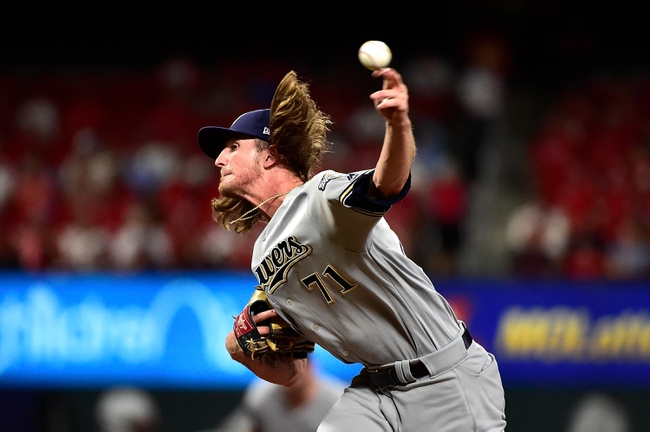 TV: FS-W Stream the MLB Game of the Day all season on ESPN+. Sign up now!

The Milwaukee Brewers and the St. Louis Cardinals meet in the rubber match of their three game NL Central division set from Busch Stadium on Sunday.

The Milwaukee Brewers will look to win the series after evening the set up at one win apiece following a 5-2 win in game two on Saturday. Yasmani Grandal and Mike Moustakas each had a home run and two RBIs while Eric Thames added an RBI to cap off Milwaukee’s scoring as a team in the win. Trent Grisham went 2 for 4 while Lorenzo Cain and Cory Spangenberg each had a base hit to round out the Brew Crew’s offense in victory. Jordan Lyles got the win to improve to 11-8 on the year after allowing two runs, one earned, on six hits while striking out four over six innings of work. Josh Hader closed out the 9th for his 32nd save of the year. Chase Anderson will start the finale and is 6-4 with a 4.57 ERA and 112 strikeouts this season. In his career, Anderson is 2-2 with a 3.05 ERA and 61 strikeouts against St. Louis.

The St. Louis Cardinals will look to bounce back after dropping game two on Saturday. Tommy Edman went 2 for 4 with a solo home run while Kolten Wong also went 2 for 4 and Dexter Fowler added a double. Marcell Ozuna and Harrison Bader each had a base hit to finish off the Cardinals’ offense as a team in the losing effort. Jack Flaherty took the loss, falling to 10-8 after allowing three runs on five hits while striking out ten over six innings of work. Michael Wacha will start game three and is 6-7 with a 4.97 ERA and 99 strikeouts this season. In his career, Wacha is 6-0 with a 3.62 ERA and 72 strikeouts against Milwaukee.

Milwaukee and the plus money is tempting considering that the Brewers are running out of time to make up ground in the wild card race, but Anderson’s not a pitcher I try to back on the road, especially because he has a 5.77 ERA away from home this season. On the other hand, Wacha’s had success against the Brewers in his career, but there have been mixed results lately. Instead, I’m going to side with the over. Wacha against the Brewers usually produces high scoring affairs at home in recent meetings and I think the Cardinals can get some runs off of Anderson too so I’ll back the over in this situation.