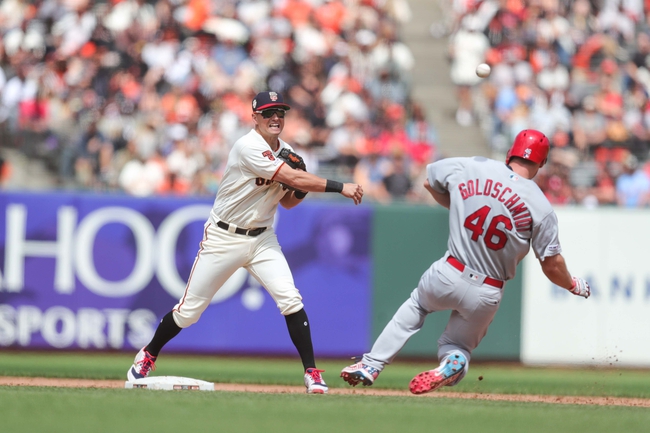 The San Francisco Giants and the St. Louis Cardinals meet in game one of a four game set in MLB action from Busch Stadium on Monday.

The San Francisco Giants will look to bounce back after losing their series with San Diego, making Sunday’s 8-4 loss their 5th loss in their last 6 games. Kevin Pillar and Evan Longoria each had a home run and two RBIs to make up San Francisco’s offense as a team in the losing effort for the Giants. Donovan Solano went 2 for 4 while Austin Slater and Brandon Crawford each had a base hit to finish off the Giants’ offense as a team in the loss. Jeff Samardzija took the loss, falling to 9-11 on the year after allowing six runs on nine hits over 5.1 innings of work. Tyler Beede will start game one and is 3-8 with a 5.56 ERA and 89 strikeouts this season. This will be Beede’s first career start against St. Louis.

The St. Louis Cardinals will look to bounce back after failing to complete the sweep of Cincinnati in a doubleheader on Sunday. The Cards won game one by a final score of 4-3 but lost the finale by a final score of 5-3. Game one saw Harrison Bader put up two RBIs while Paul DeJong added an RBI and Yadier Molina went 2 for 4 with a double. Game two saw Andrew Knizner record a home run and two RBIs while Kolten Wong went 3 for 4 with a triple and an RBI. In the opener, Miles Mikolas threw six innings, allowing three runs on four hits, not factoring in the decision, while Carlos Martinez picked up the win to improve to 4-2. Game two saw Daniel Ponce de Leon take the loss, falling to 1-2 on the year after allowing four runs, three earned, on five hits over four innings of work. Adam Wainwright will start game one and is 9-9 with a 4.52 ERA and 130 strikeouts this season. In his career, Wainwright is 6-7 with a 3.31 ERA and 75 strikeouts against San Francisco.

The heavy plus money is kind of tempting with San Francisco, but the problem for San Francisco is that the Giants just don’t win with Beede on the mound, losing each of his last seven starts. St. Louis is in the thick of the wild card race, have been the much hotter team and Wainwright has pitched pretty well lately, including some recent solid outings at home. I'll lay the juice with St. Louis at home for the series opening win.