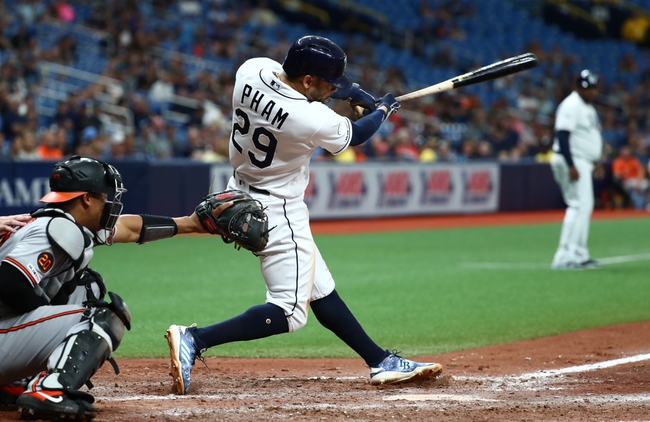 The Baltimore Orioles and the Tampa Bay Rays meet in game one of a doubleheader from Tropicana Field on Tuesday.

The Baltimore Orioles will look to bounce back after dropping the opener on Monday by a final score of 5-4. Mark Trumbo had a double and two RBIs while Hanser Alberto went 2 for 5 with a solo home run and Pedro Severino had an RBI to round out Baltimore’s scoring as a team in the loss. Jonathan Villar went 2 for 4 while Trey Mancini, Anthony Santander and Renato Nunez each added a base hit to cap off Baltimore’s offense in defeat. Asher Wojciechowski gave up four runs on five hits while striking out five over seven innings of work, not factoring in the decision. Dillon Tate ended up with the loss, falling to 0-1 on the year. Ty Blach will start this one and is 0-2 with a 12.15 ERA and 12 strikeouts this season. This will be Blach’s second career start against Tampa Bay.

The Tampa Bay Rays will look to build on their victory from Monday’s series opener. Tommy Pham went 3 for 4 with a double and three RBIs while Austin Meadows went 2 for 4 with a home run and two RBIs to make up Tampa Bay’s scoring as a team in the win. Joey Wendle added a base hit to make up the rest of the Rays’ offense as Tampa Bay had just six hits as a team in the winning effort. Ryan Yarbrough allowed four runs on nine hits while striking out four over six innings of work, not factoring in the decision. Colin Poche got the win in relief to improve to 4-4 on the year. Trevor Richards will start this one and is 4-12 with a 4.29 ERA and 118 strikeouts this season. In his career, Richards is 1-1 with a 5.79 ERA and 7 strikeouts against Baltimore.

Doubleheaders can be tricky to call, but this first game is definitely the easier of the two to call. Blach has been terrible in a Baltimore uniform, allowing 19 runs, 18 earned in three starts, spanning just 13.1 innings of work. Richards has had his ups and downs on the year, but he’s been pretty serviceable for the Rays since coming across from Miami, so I’ll side with the better team with the somewhat more reliable pitcher, and for me here, that’s Tampa Bay.