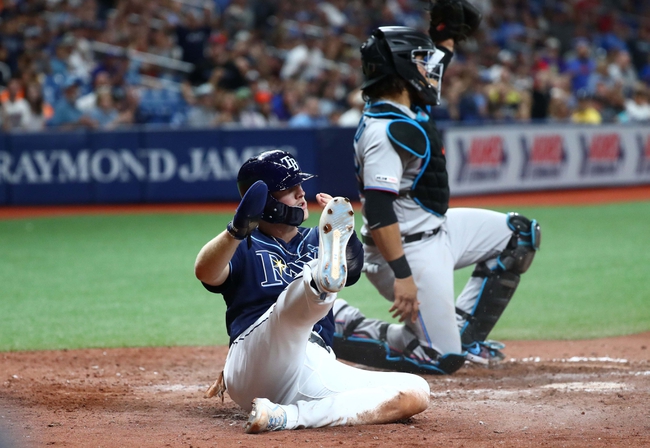 The Miami Marlins and the Tampa Bay Rays meet in the finale of their mini two game interleague set in MLB action from Tropicana Field on Sunday.

The Miami Marlins will look to bounce back and earn a series split after dropping game one on Saturday by a final score of 8-6. Starlin Castro had a home run and two RBIs while Jon Berti went 3 for 5 with a triple, a double and an RBI. Brian Anderson, Garrett Cooper and Cesar Puello each added an RBI to round out Miami’s scoring as a team Miguel Rojas went 2 for 5 with a double while Neil Walker, Harold Ramirez and Jorge Alfaro each had a base hit to cap off Miami’s offense in the loss. Elieser Hernandez gave up five runs on four hits while walking four over three innings of work, not factoring in the decision. Jarlin Garcia took the loss, falling to 2-1 on the year in the loss. Caleb Smith will start game two and is 7-4 with a 3.43 ERA and 119 strikeouts this season. In his career, Smith is 0-1 with a 4.15 ERA and 12 strikeouts against Tampa Bay.

The Tampa Bay Rays will look to complete the sweep and move on after taking game one on Saturday. Eric Sogard had a pair of home runs and five RBIs while Austin Meadows and Willy Adames each had a solo home run as well in the win. Travis D’Arnaud had an RBI to finish off the Rays’ scoring as a team in the victory while Tommy Pham added a double while Ji-Man Choi and Avisail Garcia each chipped in a pair of base hits. Nick Anderson picked up the win in relief to improve to 1-0 on the year while Emilio Pagan picked up his 9th save of the season. Yonny Chirinos will start game two and is 8-5 with a 3.70 ERA and 106 strikeouts this season. This will be Chirinos’ first career start against Miami.

Tampa being a big favorite at home makes sense as Chirinos has been solid for most of the season so far and the Rays have won five straight and seven of eight coming into this one. However, Chirinos is coming off of a start in which he allowed seven runs in four innings against Toronto, and while he isn’t as good on the road as he is at home, Smith has been arguably Miami’s most consistent starter this season and the Marlins have won each of his last five starts with Smith himself going 4-0 over that stretch. I think if Miami were going to steal a game, Smith is the guy to get it done, so I’ll take a shot with Miami and the plus money in this one.