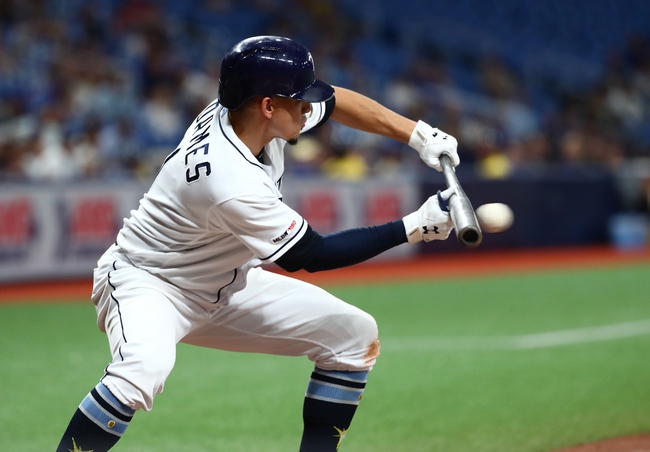 TV: RSN Stream the MLB Game of the Day all season on ESPN+. Sign up now!

The Toronto Blue Jays and the Tampa Bay Rays meet in the rubber match of their three game AL East division set from Tropicana Field on Wednesday.

The Toronto Blue Jays will look to bounce back and win the set after dropping game two on Tuesday by a final score of 7-6. Brandon Drury went 3 for 4 with a home run and three RBIs while Cavan Biggio had a solo home run of his own as well in the loss. Bo Bichette went 2 for 5 with a double and Danny Jansen added a double as well while Randal Grichuk chipped in a base hit to cap off Toronto’s offense in defeat. Trent Thornton allowed six runs on eight hits over 3.2 innings of work, not factoring in the decision. Buddy Boshers gave up the walk-off RBI, taking the loss to fall to 0-2 on the year. The Blue Jays did not have a starting pitcher announced at the time of posting.

The Tampa Bay Rays will look to win the series after evening the set up at one win apiece with their walk-off win on Tuesday. Austin Meadows, Avisail Garcia and Willy Adames each had a home run and two RBIs with Meadows going 3 for 5 at the dish. Kevin Kiermaier went 3 for 5 with a pair of doubles while Travis D’Arnaud, Jesus Aguilar, Eric Sogard and Matt Duffy each had base hits as well in the victory. Diego Castillo picked up the win in relief to improve to 2-6 on the year. Brendan McKay will start game three and is 2-1 with a 4.38 ERA and 25 strikeouts this season. This will be McKay’s first career start against Toronto.

You could make a case for the Blue Jays as the recent youth injection in their lineup has paid dividends along with the fact that McKay’s last two starts at home have yielded nine runs in just 8.1 innings of work. However, Tampa Bay has the momentum right now after rallying from six runs down again against Toronto on Tuesday, and culminating in a walk-off, and the Rays have just been the hotter team overall lately as their playoff push is back on. I’ll side with the Rays in the series finale on Wednesday.