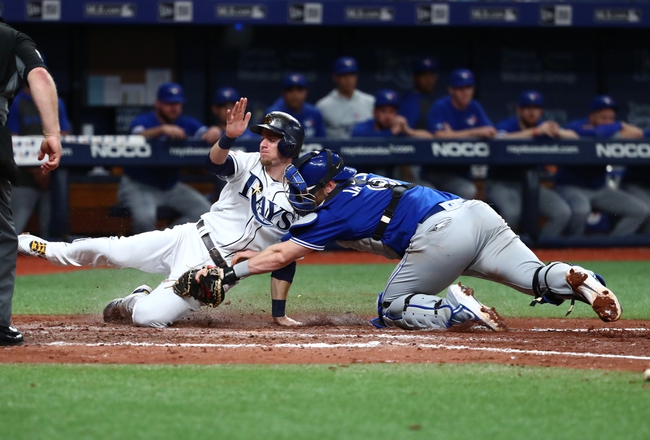 The Toronto Blue Jays need a win after losing 10 of their last 13 games. The Blue Jays have scored six runs in their last three games and four or more runs in six of their last 12 games. The Toronto Blue Jays have lost four of their last six games when scoring four or more runs. Randal Grichuk leads the Blue Jays with 117 hits and 62 RBI while Vladimir Guerrero Jr. and Brandon Drury have combined for 192 hits and 100 RBI. Anthony Kay will make his major league debut when he takes the ball tonight. Kay was 17-19 with a 3.58 ERA and 258 strikeouts in his minor league career.

The Tampa Bay Rays look to stay hot after winning eight of their last nine games. The Rays have scored 13 runs in their last three games and four or more runs in seven of their last nine games. The Tampa Bay Rays have won seven straight games when scoring four or more runs. Tommy Pham leads the Rays with 139 hits and 61 RBI while Austin Meadows and Avisail Garcia have combined for 249 hits and 137 RBI. Charlie Morton gets the ball, and he is 14-6 with a 3.06 ERA and 209 strikeouts this season. Morton is 2-1 with a 1.99 ERA and 36 strikeouts in his career against the Blue Jays.

Kay was a first round pick in the 2016 draft, so he has to have some impressive stuff and should be given a fair shot to have a successful MLB career. Morton has allowed 34 hits and 16 earned runs in his last 34.1 innings, and he has a 2.62 ERA and .198 allowed batting average at home this season. I have a thing where I don't like backing pitchers making their big league debut, and that goes on top of the Rays playing well, the Blue Jays not and Morton being highly efficient when pitching at Tropicana Field. Give me the Rays.