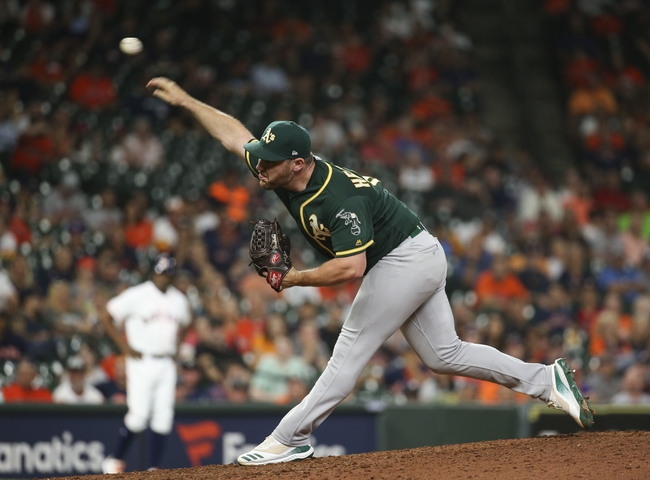 The Oakland A’s and the Texas Rangers meet in game one of a three game AL West division set in MLB action from Globe Life Park on Friday night.

The Oakland A’s will look to maintain their momentum after scraping out a 3-2 win in their series finale with Houston on Thursday night. Matt Olson had a home run and two RBIs while Seth Brown had a double and an RBI to round out Oakland’s scoring as a team in the win. Marcus Semien and Mark Canha each had a base hit to cap off the A’s offense as Oakland had just six hits as a team in the winning effort. Homer Bailey got the win to improve to 13-8 on the year after allowing one run on three hits while walking three and striking out four over 5.1 innings of work. Liam Hendriks closed out the 9th for his 21st save of the season. Chris Bassitt will start game one and is 10-5 with a 3.64 ERA and 129 strikeouts this season. In his career, Bassitt is 1-2 with a 5.09 ERA and 18 strikeouts against Texas.

The Texas Rangers will look to finish strong after winning their series with Tampa Bay, taking Thursday’s rubber match by a final score of 6-4. Nick Solak had a home run and two RBIs while Rougned Odor added a solo home run and Elvis Andrus and Danny Santana each had an RBI as well in the win. Delino DeShields and Jose Trevino each had two hits with a double while Isiah Kiner-Falefa and Ronald Guzman each had a base hit to finish off Texas’ offense as a team in the win. Kolby Allard allowed four runs on seven hits while walking three over four innings of work, not factoring in the decision. Luke Farrell got the win to improve to 1-0 while Jose Leclerc closed out the 9th for his 13th save. Brock Burke will start game one and is 0-1 with a 3.52 ERA and 12 strikeouts this season. This will be Burke’s first career start against Oakland.

The plus money is worth a look as Burke’s two starts at home have yielded just two runs over 12 innings of work. However, Burke got rocked in his last start and that’s not the kind of outing you want to bring into a matchup against an Oakland team that’s full of confidence after taking three of four from the best team in the division right in the midst of the playoff race. I just think that Oakland is playing at a different level right now and have their sights set on a wild card berth, so while the Rangers are playing well, I just think Oakland will end up being just a bit too much, so I’ll lay the juice with the A’s here.