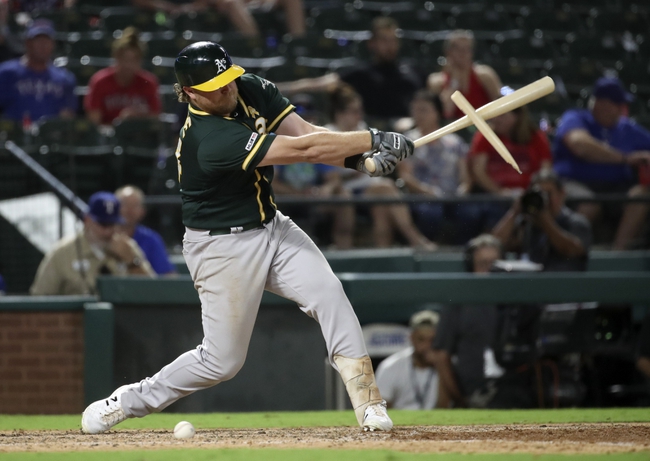 The Oakland A’s and the Texas Rangers meet in game two of their three game AL West division set from Globe Life Park on Saturday night.

The Oakland A’s will look to keep the ball rolling after winning the series opener on Friday, pushing their winning streak to four with a 14-9 win. Ramon Laureano and Khris Davis each had a home run and four RBIs while Davis had a pair of home runs in the win. Sheldon Neuse went 4 for 5 with three RBIs while Marcus Semien had a home run and two RBIs. Matt Olson added a solo home run to cap off Oakland’s scoring as a team in the win while Sean Murphy went 3 for 4 with three doubles. Mark Canha and Seth Brown each had a base hit to finish off Oakland’s offense as a team in the victory. Chris Bassitt allowed seven runs, six earned, on five hits while striking out three over three innings of work. J.B. Wendelken got the win in relief to improve to 2-1 on the year. Mike Fiers will start game two and is 14-4 with a 3.97 ERA and 116 strikeouts this season. In his career, Fiers is 3-3 with a 6.23 ERA and 59 strikeouts against Texas.

The Texas Rangers will look to bounce back after dropping the series opener on Friday. Shin-Soo Choo and Danny Santana each had a home run and three RBIs while Elvis Andrus added two RBIs and Ronald Guzman had a double and an RBI to cap off Texas’ scoring as a team in the loss. Willie Calhoun, Rougned Odor and Jose Trevino each chipped in a base hit to finish off Texas’ offense in the defeat. Brock Burke allowed six runs on six hits over three innings of work, not factoring in the decision. Ian Gibaut took the loss, falling to 1-1 on the year in relief. Mike Minor will start game two and is 13-8 with a 3.08 ERA and 183 strikeouts this season. In his career, Minor is 2-2 with a 3.38 ERA and 23 strikeouts against Oakland.

The A’s and a low line with Fiers on the mound is definitely worth a look as he’s been arguably their best and most consistent pitcher so far this season. However, Fiers just got rocked for nine runs in one inning on the road against Houston last time out, and he has a 5.00 ERA on the road this season, as well as having allowed six runs in five innings at Globe Life Park earlier this season. Minor’s ERA is higher at home compared to on the road, and his ERA against Oakland sits at six after just one start against the A’s this season. The bottom line is that Oakland is the only team here with something to play for, and getting them with a low line looks like a solid bet to me on Saturday, so I’ll lay the juice with Oakland in this spot.