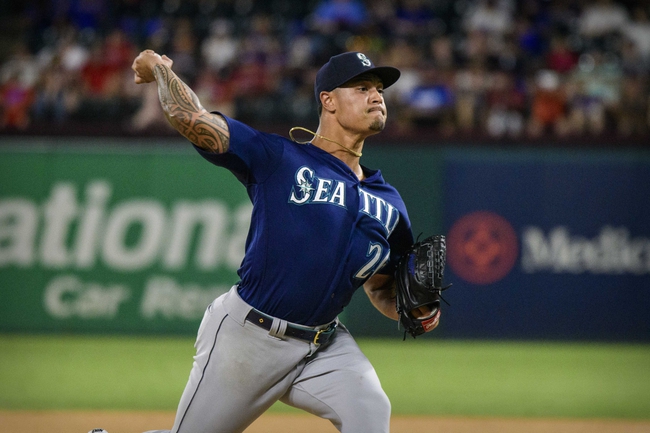 TV: FS-Southwest, ROOT-Northwest Stream the MLB Game of the Day all season on ESPN+. Sign up now!

The Seattle Mariners and the Texas Rangers meet in game two of their three game AL West division set in MLB action from Globe Life Park on Wednesday.

The Seattle Mariners will look to keep their momentum going after running their winning streak to six games with an 8-5 win in game one on Tuesday. Kyle Seager went 3 for 5 with a home run, a triple and four RBIs while Domingo Santana added a solo home run. Daniel Vogelbach went 2 for 4 with a double and an RBI while Tim Beckham chipped in an RBI as well to cap off Seattle’s scoring as a team in the win. Austin Nola went 3 for 5 with a pair of doubles while Keon Broxton and Mallex Smith each had a base hit as well in the victory. Mike Leake gave up five runs, four earned on ten hits over 5.2 innings of work, not factoring in the decision. Sam Tuivailala got the win to improve to 1-0 on the year while Roenis Elias picked up his 14th save of the season. The Mariners did not announce a starting pitcher at the time of posting this article.

The Texas Rangers will look to bounce back after losing 12 of their last 15 games following the series opening loss on Tuesday. Rougned Odor went 2 for 4 with a double and three RBIs while Danny Santana had a solo home run and Delino DeShields went 3 for 4 with an RBI to cap off Texas’ scoring as a team in the loss. Nomar Mazara went 2 for 5 with a double and Willie Calhoun had three hits while Tim Fedorowicz, Elvis Andrus and Shin-Soo Choo each contributed hits as well in the defeat. Ariel Jurado allowed four runs, three earned, on seven hits while striking out three over four innings of work, not factoring in the decision. Brett Martin took the loss in relief, falling to 1-2 on the year. Mike Minor will start game two and is 8-6 with a 3.00 ERA and 136 strikeouts this season. In his career, Minor is 3-4 with a 4.28 ERA and 60 strikeouts against Seattle.

Minor has been solid at home this season with an ERA under three, but the problem is that Texas is watching their season unravel before their eyes and Minor hasn’t been able to help things despite being one of the better pitchers in the rotation all season, as the Rangers have lost each of his last four starts and Minor himself has allowed at least four runs in each of his last three starts. We don’t know who will start for Seattle here, but the Mariners have been playing well lately and are the team in much better form, so I’ll side with Seattle to keep the winning streak going for at least one more day with a game two victory on Wednesday.