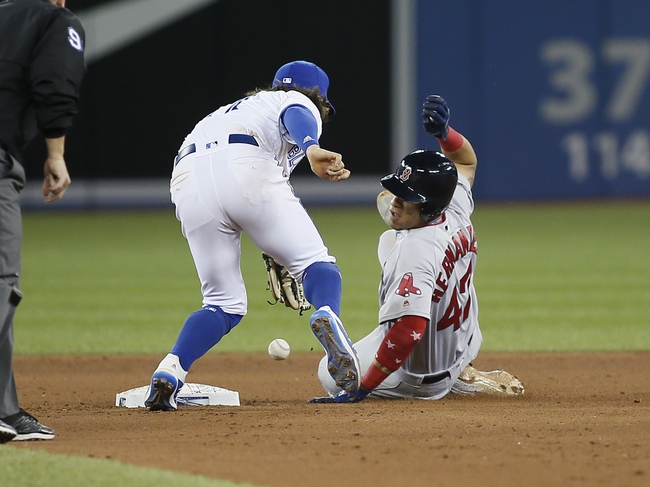 The Boston Red Sox need a win after losing five of their last six games. The Red Sox have scored eight runs in their last three games and four or more runs in 10 of their last 15 games. The Boston Red Sox have won 10 of their last 13 games when scoring four or more runs. Rafael Devers leads the Red Sox with 182 hits and 107 RBI while Xander Bogaerts and Mookie Betts have combined for 333 hits and 183 RBI. Jhoulys Chacin gets the ball, and he is 3-10 with a 5.60 ERA and 84 strikeouts this season. This will be Chacin’s first career game against the Blue Jays.

The Toronto Blue Jays need a win after losing 10 of their last 13 games. The Blue Jays have scored 10 runs in their last three games and three or less runs in six of their last eight games. The Toronto Blue Jays have lost six straight games when scoring three or less runs. Randal Grichuk leads the Blue Jays with 119 hits and 64 RBI while Vladimir Guerrero Jr. and Brandon Drury have combined for 195 hits and 101 RBI. Trent Thornton gets the ball, and he is 4-9 with a 5.23 ERA and 127 strikeouts this season. Thornton is 0-2 with a 12.19 ERA and eight strikeouts in his career against the Red Sox.

Chacin has allowed zero hits and zero runs with four strikeouts in three innings since coming over from Milwaukee. Thornton has allowed 40 hits and 14 earned runs in his last 35.1 innings, and he has a 5.72 ERA and .274 allowed batting average at home. Thornton simply hasn't been good this season, and he's allowing a .444 batting average with two homers in 54 at bats against current Red Sox hitters. The Toronto Blue Jays also haven't won back-to-back games in a month, and the Red Sox are in must win territory if they have any hope of saving their season. I'll take the Red Sox, but the price isn't ideal given their current form.