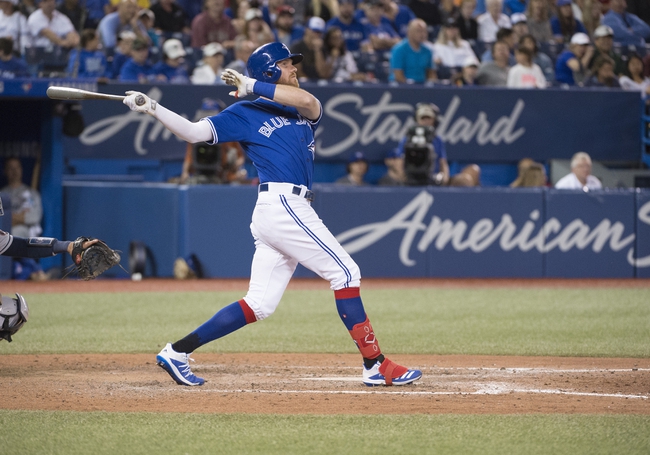 TV: RSN Stream the MLB Game of the Day all season on ESPN+. Sign up now!

The Houston Astros and the Toronto Blue Jays meet in game two of their three game set in MLB action from Rogers Centre on Saturday.

The Houston Astros will look to keep the ball rolling after starting the series with a 7-4 win over Toronto on Friday. George Springer went 2 for 4 with a home run, a double and four RBIs while Alex Bregman, Aledmys Diaz and Josh Reddick each had an RBI to cap off Houston’s scoring as a team in the win. Michael Brantley and Jose Altuve each went 2 for 5 while Robinson Chirinos and Yuli Gurriel each contributed a double to the cause. Yordan Alvarez added a base hit to finish off Houston’s offense as a team in the victory. Wade Miley allowed an unearned run on two hits while walking and whiffing five apiece over 3.2 innings of work, not factoring in the decision. Collin McHugh got the win in relief to improve to 4-5 on the year. Framber Valdez will start game two and is 4-6 with a 5.14 ERA and 53 strikeouts this season. This will be Valdez’s second career start against Toronto.

The Toronto Blue Jays will look to bounce back after a loss in Friday’s series opener. Reese McGuire went 3 for 3 with a home run and two RBIs while Derek Fisher and Cavan Biggio each launched solo homers to make up Toronto’s scoring output in the loss. Bo Bichette had a double while Teoscar Hernandez and Justin Smoak each contributed a base hit to finish off Toronto’s offense in defeat. Trent Thornton took the loss, falling to 4-9 on the year after allowing four runs, three earned, on six hits while striking out six over five innings of work. Clay Buchholz will start game two and is 0-3 with a 5.87 ERA and 15 strikeouts this season. In his career, Buchholz is 3-1 with a 3.05 ERA and 50 strikeouts against Houston.

You can definitely make a case that Houston is the better team, but I’m not trying to side with Valdez pitching on the road, a pitcher who has allowed 16 runs, 13 earned, in his last three appearances on the road spanning eight innings of work. On the other hand, while Buchholz pitched well in his return to the Blue Jays’ rotation, the Jays just haven’t been able to win with him on the mound, dropping his last four starts. I can’t trust the pitching matchup on either side so I’ll side with the over here. Houston’s going to score some runs and I think Toronto can plate a few as well with Valdez pitching on the road.