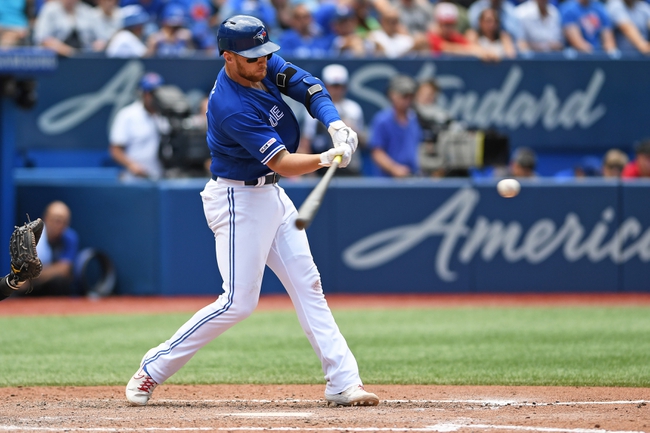 The New York Yankees and the Toronto Blue Jays meet in game one of a three game AL East division matchup from Rogers Centre on Friday night.

The New York Yankees will look to build some momentum after sweeping a doubleheader on Wednesday against Detroit to win the series, taking game one by a final count of 10-4 while taking game two by a final score of 6-4. Game one saw Luke Voit lead the way with a home run, a double and three RBIs while Edwin Encarnacion had a home run and two RBIs and Didi Gregorius and Cameron Maybin each had two RBIs as well with Didi tripling and Maybin adding a double. Game two saw Aaron Judge and Gio Urshela each have a home run and two RBIs while DJ LeMahieu had a double and an RBI and Didi Gregorius had another RBI to make up New York’s scoring in the win. J.A. Happ gave up two runs on seven hits while walking three and striking out six in game one, not factoring in the decision while Chad Green got the win in relief to improve to 4-4 on the year. Game two saw CC Sabathia go 3.1 innings, giving up two runs on three hits, not factoring in the decision, while Domingo German got the win with four innings of relief to improve to 18-4 and Aroldis Chapman closed out the 9th for his 37th save of the season. Masahiro Tanaka will start game one and is 10-8 with a 4.53 ERA and 135 strikeouts this season. In his career, Tanaka is 13-5 with a 2.69 ERA and 122 strikeouts against Toronto.

The Toronto Blue Jays will look to rebound after dropping their series finale against the Red Sox by a final score of 7-4 on Thursday. Cavan Biggio went 3 for 4 with a triple and an RBI while Vladimir Guerrero Jr., Rowdy Tellez and Derek Fisher each had RBIs as well in the defeat. Randal Grichuk and Bo Bichette each added a double while Anthony Alford chipped in a base hit of his own to cap off Toronto’s offense as a team in the losing effort. Clay Buchholz took the loss, falling to 1-5 after allowing four runs on seven hits while striking out four over four innings of work. Anthony Kay will start game one and is 0-0 with a 3.18 ERA and 8 strikeouts this season. This will be Kay’s first career start against the Yankees.

The plus money is worth a look as Tanaka’s been rocked a little bit on the road lately, giving up at least four runs in two of his last three road starts. However, while Kay had a solid first outing, the Yankees are a better team than the Tampa Bay Rays and are fighting for home field in the playoffs. Tanaka just threw eight shutout innings against the Jays in Toronto about a month ago, and given what’s at stake for the Yankees, I think he can replicate some of that success. So given Tanaka’s track record against Toronto, I’ll side with the Yankees and to get rid of some of the heavy juice, I’ll back the Yanks on the RL.