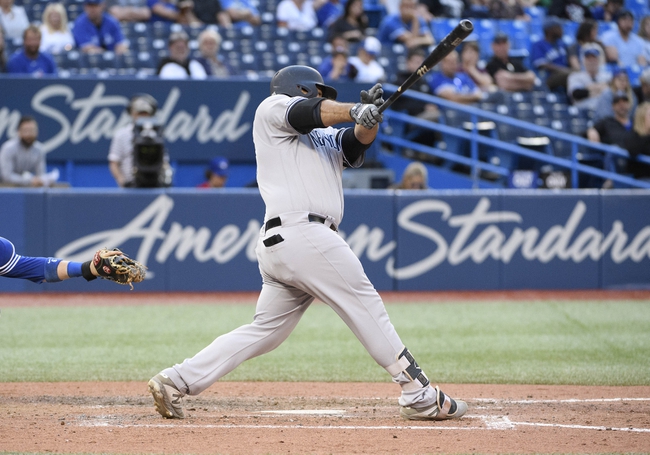 The New York Yankees and the Toronto Blue Jays meet in the rubber match of their three game AL East division set in MLB action from Rogers Centre on Sunday.

The New York Yankees will look to win the series after evening the set up at one win apiece following a 13-3 win in game two on Saturday. Brett Gardner led the charge, going 3 for 5 with a pair of home runs, a double and five RBIs while Gleyber Torres, Luke Voit and Mike Ford each had a home run and two RBIs with Voit going 2 for 3 with a double as well. Tyler Wade and Thairo Estrada each had an RBI to finish off New York’s scoring as a team in the win while DJ LeMahieu went 4 for 6 and Clint Frazier and Kyle Higashioka each had a double as well. Gio Urshela went 2 for 6 while Cameron Maybin and Aaron Judge each had a base hit to cap off the Yankee offense in the win. James Paxton got the win to improve to 14-6 on the year after allowing one run on three hits while striking out three over five innings of work. Jordan Montgomery will make his regular season debut here after going 2-0 with a 3.62 ERA and 23 strikeouts in six starts for the Yankees last season. In his career, Montgomery is 2-0 with a 1.04 ERA and 13 strikeouts against Toronto.

The Toronto Blue Jays will look to rebound and take the series after losing game two on Saturday. Richard Urena had a double and two RBIs while Bo Bichette added an RBI to cap off Toronto’s scoring as a team in the loss. Lourdes Gurriel Jr. and Brandon Drury each had two hits with a double while Vladimir Guerrero Jr., Anthony Alford and Teoscar Hernandez each added a base hit. Jacob Waguespack took the loss, falling to 4-5 after allowing three runs on seven hits while striking out four over 3.2 innings of work. T.J. Zeuch will start game three and is 0-0 with a 5.40 ERA and 5 strikeouts this season. This will be Zeuch’s first career start against the Yankees.

I know the Yankees are the better team here, but I’m not about to lay this kind of juice when Montgomery hasn’t pitched since May of last year in the majors. On the other hand, Zeuch only had 8.1 major league innings under his belt. Instead of trying to pick a side in this horrendous pitching matchup, I’m going to side with the over. Both teams can flex some offensive muscle and I expect both starters to either get the hook early or be put in uncomfortable situations, so I’ll bank on a high total here.