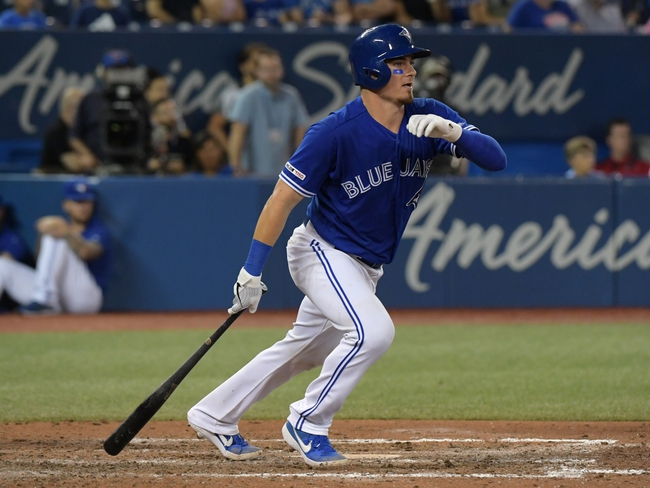 TV: RSN, ROOT-Northwest Stream the MLB Game of the Day all season on ESPN+. Sign up now!

The Seattle Mariners and the Toronto Blue Jays meet in the rubber match of their three game set from Rogers Centre on Sunday.

The Seattle Mariners will look to win the series after evening the set up at one win apiece following a 4-3 win in game two on Saturday. Keon Broxton had two RBIs while Austin Nola and Kyle Seager each chipped in a solo home run to round out Seattle’s scoring as a team in the win. Daniel Vogelbach added a double while Dee Gordon and Tim Lopes each chipped in a base hit to cap off Seattle’s offense as the M’s had just six hits as a team in the victory. Anthony Bass got the win in relief to improve to 2-4 on the year while Matt Magill got his 1st save of the year. Yusei Kikuchi will start game three and is 4-8 with a 5.56 ERA and 95 strikeouts this season. This will be Kikuchi’s first career start against Toronto.

The Toronto Blue Jays will look to bounce back Bo Bichette and Reese McGuire each had two hits with a solo home run with McGuire adding a double. Billy McKinney chipped in a double and an RBI while Brandon Drury and Justin Smoak each had a double. Cavan Biggio and Rowdy Tellez each contributed a base hit to finish off Toronto’s offense in the loss. Trent Thornton allowed three runs on five hits while walking four and striking out three over six innings of work, not factoring in the decision. Tim Mayza got the win to improve to 1-2 on the year. Wilmer Font will start game three and is 3-2 with a 4.40 ERA and 63 strikeouts this season. This will be Font’s second career start against Seattle.

Kikuchi has been hit hard for most of the season no matter where he pitches, as he has an ERA just shy of six on the road this season, so Seattle being an underdog here makes sense. On the other hand, I’m not laying this kind of juice in what’s probably going to be a bullpen game for Toronto, and Font hasn’t been the easiest to trust in recent memory. Instead, I’m going to side with the over as I see the Jays getting to Kikuchi early and often as well as Seattle putting up a few runs of their own in the finale.