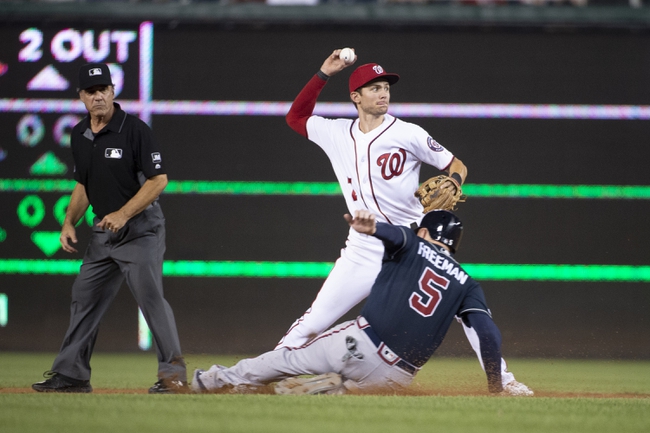 TV: FS-Southeast, MASN Stream the MLB Game of the Day all season on ESPN+. Sign up now!

The Atlanta Braves and the Washington Nationals meet in game two of their three game NL East division set in MLB action from Nationals Park on Tuesday.

The Atlanta Braves will look to rebound after losing the series opener on Monday by a final score of 6-3. Charlie Culberson had a pinch-hit home run while Adam Duvall added an RBI and Freddie Freeman went 3 for 4 at the dish in the loss. Josh Donaldson and Johan Camargo each added a base hit as well to cap off Atlanta’s offense as a team in defeat. Dallas Keuchel took the loss, falling to 3-4 on the year after allowing four runs on six hits while walking and striking out four apiece over 5.1 innings of work. Julio Teheran will start game two and is 5-7 with a 3.42 ERA and 108 strikeouts this season. In his career, Teheran is 6-6 with a 4.02 ERA and 112 strikeouts against Washington.

The Washington Nationals will look to keep the momentum going after opening the series on the right foot with Monday’s victory. Anthony Rendon belted his 3rd career grand slam while Trea Turner had a double and an RBI and Juan Soto added an RBI of his own as well to round out Washington’s scoring in the win. Howie Kendrick went 2 for 5 while Adrian Sanchez added a base hit to sum up Washington’s offense in the victory. Patrick Corbin got the win to improve to 9-5 on the year after allowing two runs on five hits while striking out eight over six innings of work. Erick Fedde will start game two and is 1-1 with a 3.40 ERA and 26 strikeouts this season. This will be Fedde’s first career start against Atlanta.

Washington being favored here makes sense as the Nationals have been one of the major league’s hottest teams over the last month and Fedde has been solid in his first couple of starts since rejoining the rotation, allowing just two runs in ten innings of work. Teheran has also been shaky on the road, where his ERA nearly doubles to 4.45 compared to 2.26 at home this season. However, this series means just as much to Atlanta as it does Washington as the Braves are trying to keep distance between themselves and Washington, and while Teheran hasn’t had the record to show for it, he’s been solid in the month of July, giving up just three earned runs across 23.2 innings in his last four starts. I just think this kind of plus money with Atlanta is too good to pass on, so I’ll take a shot with the Braves and the plus money here.