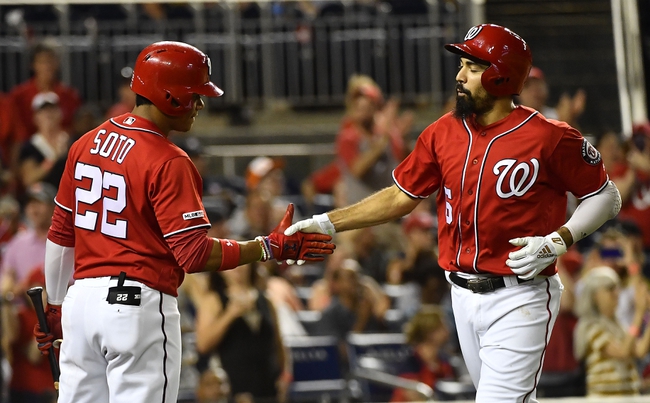 The Miami Marlins and the Washington Nationals meet in the finale of their three game NL East division set in MLB action from Nationals Park on Sunday.

The Miami Marlins will look to salvage a win and avoid the sweep after dropping game two on Saturday by a final score of 7-0. Harold Ramirez and Starlin Castro each had a base hit as the Fish cranked out just two hits as a team in the losing effort with the rest of the Marlins batting 0 for 21 with 14 strikeouts as Miami had a whopping 17 Ks in the defeat. Pablo Lopez took the loss, falling to 5-7 on the year after allowing six runs on six hits over three innings of work. Caleb Smith will start game three and is 8-8 with a 4.05 ERA and 143 strikeouts this season. In his career, Smith is 1-1 with a 6.00 ERA and 9 strikeouts against Washington.

The Washington Nationals will look to complete the sweep after a victory in game two on Saturday. Juan Soto, Kurt Suzuki and Anthony Rendon each had a home run and two RBIs with Rendon going 2 for 3 with a pair of solo home runs while Soto had a double as well. Stephen Strasburg added an RBI to help his own cause in the win while Victor Robles added a double and Brian Dozier added a base hit as well to finish off Washington’s offense in the victory. Strasburg got the win on the mound to improve to 16-5 on the year after throwing eight shutout innings, giving up just two hits while striking out 14. Patrick Corbin will start game three and is 10-6 with a 3.15 ERA and 193 strikeouts this season. In his career, Corbin is 3-1 with a 3.15 ERA and 53 strikeouts against Miami.

I’d like to say I could give the plus money a look, but the fact is that Smith isn’t as good on the road as he is at home and Miami tends to scuffle more often than not when it comes to putting runs on the board. Those problems will only be amplified considering how well Corbin’s pitched at home this season, giving up just a 1.83 ERA and a .196 batting average against in 88.2 innings at home this season. I’ll side with Washington for the sweep and to cut down the heavy juice, I’ll take Washington on the RL.