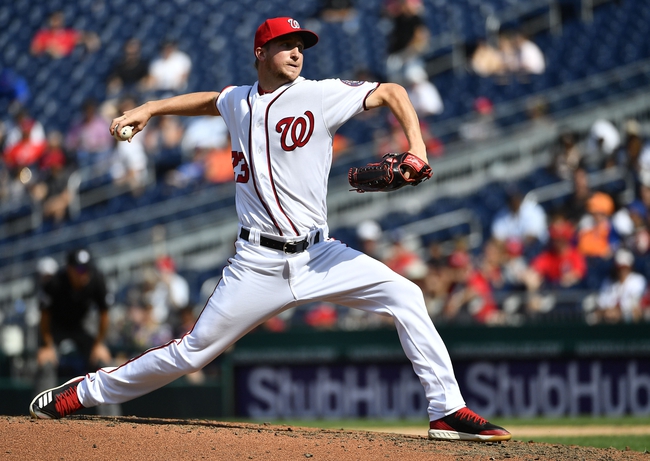 The New York Mets and the Washington Nationals meet in game two of a three game NL East division set in MLB action from Nationals Park on Tuesday night.

The New York Mets will look to find another win after taking game one on Monday by a final score of 7-3. Jeff McNeil and J.D. Davis each had two RBIs with McNeil homering while Davis went 3 for 5 with a double. Brandon Nimmo, Joe Panik and Rene Rivera each had an RBI to cap off New York’s scoring as a team in the win, with Nimmo and Panik each adding a double while Rivera went 2 for 3. Pete Alonso, Michael Conforto and Amed Rosario each had a base hit to finish off New York’s offense in the winning effort. Noah Syndergaard got the win to improve to 10-7 on the year after throwing seven shutout innings, allowing just three hits while striking out ten. Jacob DeGrom will start game two and is 8-8 with a 2.66 ERA and 214 strikeouts this season. In his career, DeGrom is 8-4 with a 2.33 ERA and 144 strikeouts against Washington.

The Washington Nationals will look to bounce back after dropping game one on Monday. Asdrubal Cabrera had a home run and three RBIs while Trea Turner went 2 for 4 and Anthony Rendon added a double. Andrew Stevenson chipped in a pinch-hit to cap off Washington’s offense as the Nats had just five hits as a team in the loss. Joe Ross took the loss, falling to 3-4 on the year after allowing all seven runs on eight hits while walking three and striking out four over 3.2 innings of work. Max Scherzer will start game two and is 9-5 with a 2.46 ERA and 200 strikeouts this season. In his career, Scherzer is 10-5 with a 2.47 ERA and 176 strikeouts against the Mets.

I think you could honestly make a case for either side as you have a pair of teams in the wild card hunt with ace pitchers on the mound. However, while Washington has won nine of Scherzer’s last ten starts, Scherzer hasn’t made it further than the 5th in each of his last three starts. The Mets still have issues winning consistently with DeGrom on the mound, but the Mets have won each of his last seven starts at Nationals Park and in the second half, DeGrom has a 1.53 ERA in nine starts. The value is with the Mets and the plus money on Tuesday.