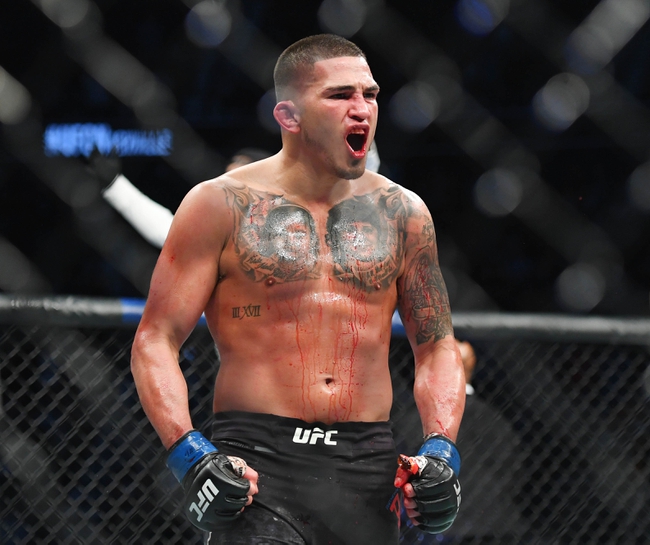 Anthony Pettis and Nate Diaz fight Saturday during UFC 241 at the Honda Center.

Anthony Pettis enters this fight with a 22-8 record and has won 50 percent of his fights by knockout. Pettis has split his last eight fights and is coming off a Mach win over Stephen Thompson. Pettis is averaging 2.87 significant strikes per minute with an accuracy percentage of 46 percent. Pettis is averaging 0.73 takedowns with an accuracy percentage of 55 percent. Pettis entered his last fight in desperate need of a victory, as he lost six of his last nine previous bouts and had many convinced that he was washed up and would never again be relevant on main cards. Pettis was down in the scorecards against Wonderboy, and he just decided to go for it and do what he’s done his whole career by throwing a Superman right hand off the cage and produced a clean knockout. Classic Pettis is creative, sometimes wild and just finds ways to win that may not exactly be traditional. The win not only stops the bleeding for Pettis in the record book, but the highlight that came with it get people excited about Showtime again and instill hope that there’s still something left in that tank at 32 years old. However, some would argue that was some luck to Pettis’ victory, so he can erase all doubt with a win here. This will be Pettis’ third career fight in California.

Nate Diaz enters this fight with a 19-11 record and has won 58 percent of his fights by submission. Diaz has split his last eight fights and is coming off an August (2016) loss to Conor McGregor. Diaz is averaging 4.64 significant strikes per minute with an accuracy percentage of 44 percent. Diaz is averaging 1.17 takedowns with an accuracy percentage of 30 percent. Diaz may have been on the wrong side of the rematch, but he traded for five rounds and actually landed more strikes throughout the fight. It’s no secret what you get with Diaz, as his cardio is at an elite level and he’s arguably the toughest fighter in the sport, as he can eat clean shots with the best of them without flinching. Diaz also usually gets stronger as the fight goes on and that’s when his work rate usually increases and the bombs start flying. Diaz is also a second degree black belt in Brazilian Jiu-Jitsu and has won four fights via the guillotine choke. The only question with Diaz is how he responds three years outside of the octagon, as this is easily the longest he’s been out of the sport since turning pro in 2014. This will be Diaz’s eighth career fight in California, his birth state.

This has the potential to be a fight of the year candidate, as these are two exciting strikers with extreme toughness. No explanation needed for Diaz, but Pettis has shown in his last two fights that he’s not going to quit and will continue to come forward even if he’s hurt. Diaz has the longer reach and has more experience at welterweight, but I’m concerned about being out of the octagon for three years. I also have questions with Diaz given that this is a three round fight, as he’s usually a slow starter and relies on the later rounds to butter his bread. Diaz can’t afford to feel his way through this thing. Pettis has looked sharp from a striking standpoint in his last two fights and could make a world of difference in this fight if he’s aggressive with those leg kicks. It’s not easy to finish Diaz with shots to the dome, but Pettis can control this fight with his kicks and squeeze out a victory on the cards.

I hav a hard time turning down plus money with Diaz, but not being active hurts him and Pettis has more variety to his striking.