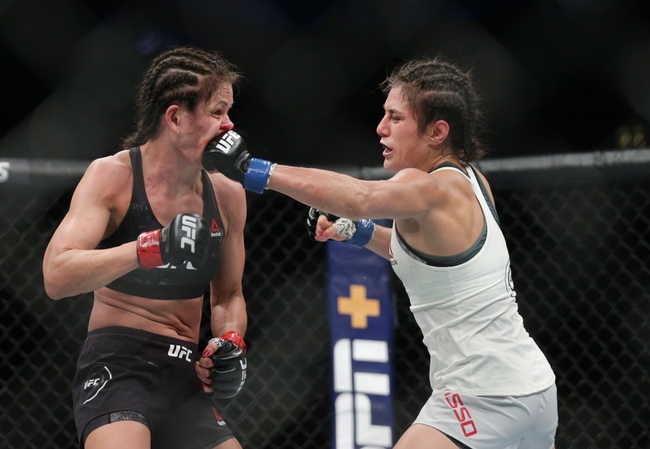 Carla Esparza enters this fight with a 14-6 record and has won 50 percent of her fights by decision. Esparza has split her last eight fights and is coming off an April win over Virna Jandiroba. Esparza is averaging 2.14 significant strikes per minute with an accuracy percentage of 39 percent. Esparza is averaging 3.47 takedowns with an accuracy percentage of 36 percent. Esparza snapped a two-fight losing skid with a dominating performance where she landed 76 percent of her strikes and produced four takedowns. Esparza has now won seven of her 10 career decisions and has a chance at one of her bigger victories under the UFC banner. Esparza has a background in wrestling and Brazilian Jiu-jitsu, so she’s often looking for the takedown where she can unleash effective ground and pound on the canvas or throw elbows and knees in the clinch. Esparza lands 29 percent of her significant strikes on the ground. When Esparza is able to get her hands on her opponent, she likes her chances to control the fight and eventually come out victorious. This will be Esparza’s first career fight in Mexico.

Alexa Grasso enters this fight with a 11-2 record and has won 64 percent of her fights by decision. Grasso has won six of her last eight fights and is coming off a June win over Karolina Kowalkiewicz. Grasso is averaging 5.79 significant strikes per minute with an accuracy percentage of 42 percent. Grasso is averaging 0.24 takedowns with an accuracy percentage of 50 percent. Grasso is coming off an impressive showing where she landed 146 total strikes and cashed as a +155 underdog. Grasso has split her last four fights and looks for back-to-back victories for the first time since 2016. Grasso hasn’t exactly fulfilled expectations since coming over from Invicta FC, but it’s important to note she just turned 26 years old, so she’s likely just starting to tap into her potential. Grasso is a standup striker at heart with terrific accuracy, technique and toughness. Grasso does a great job of standing in the middle of the octagon and landing strikes repeatedly often without allowing her opponent to counter. From a pure boxing standpoint, Grasso is up there as one of the best on the women’s side. The challenge for Grasso is to tap into the other areas of her game and improve in the clinch and on the canvas. We’ve seen Grasso struggle in her past few fights once the fight gets on the ground. This will be Grasso’s seventh career fight in Mexico, her birthplace.

This is the fight where I would expect Grasso to have issues, as Esparza is going to clinch, mix it up with knees and elbows and possibly take this thing to the canvas where she can wear her down. Grasso wants to standup and box her way to victory, and she’s proven to be ineffective and sometimes panicky when she’s taken out of her comfort zone. From just a style point of view, the edge should probably go to Esparza. With that said, I’m a big fan of Grasso and sometimes go with my heart when she’s fighting. Her technique is so good and fun to watch if you’re a fan of boxing, I can’t help but root for her to do well and continue climbing the rankings. I also don’t think we’ve seen the best from Grasso, whatever that’s worth.

I’m going to make a rare pick with my heart and side with Grasso to win this fight.