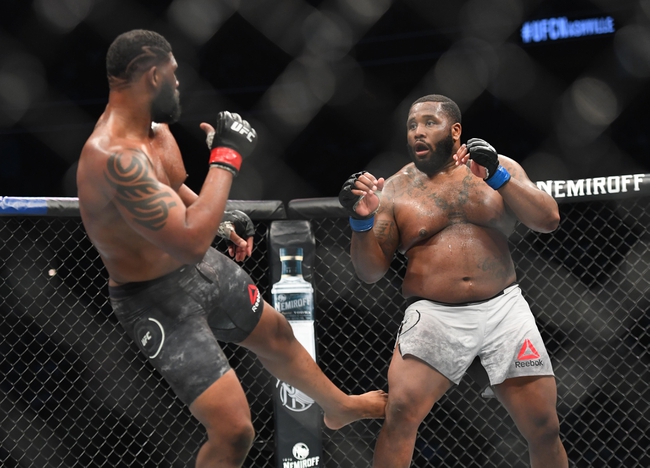 Curtis Blaydes enters this fight with a 11-2 record and has won 73 percent of his fights by knockout. Blaydes has won five of his last six fights and is coming off a March win over Justin Willis. Blaydes is averaging 3.71 significant strikes per minute with an accuracy percentage of 51 percent. Blaydes is averaging 6.79 takedowns with an accuracy percentage of 57 percent. Blaydes is coming off a convincing decision victory over Big Pretty where he got whatever he wanted offensively and dominated both with striking and takedowns. Outside of two losses to Francis Ngannou, possibly the scariest fighter in the world, Blaydes has been extremely consistent throughout his MMA career. Blaydes is a rare heavyweight in that he’s highly aggressive with his takedowns and has extreme success with his attempts, often coming in with a tackle form and picking up and throwing around some of the biggest guys in the sport. Once on the canvas, Blaydes has a nasty ground and pound, and it’s where he’s landed 47 percent of his strikes. Blaydes can obviously hold his own on the canvas and has one-punch knockout potential, but he’s most effective on the ground and usually follows up his opponents strike attempt with a takedown rather than a counterstrike. With a background in wrestling, Blaydes is one of the more balanced fighters in this division and is someone who could have a title shot soon if he keeps this up. This will be first Blaydes’ career fight in Abu Dhabi.

Abdurakhimov is enjoying his best winning streak of his career under the UFC banner and enters this bout with a lot of experience over the rising American. With a tough chin, a background in kickboxing and Sanshou, there’s a lot of different looks and creativity Abdurakhimov can throw into this fight. With all that said, Blaydes is a super talented fighter who has a massive size advantage in this fight and should simply wear on the soon-to-be-38-year-old. Blaydes is simply a wrestling machine who has gotten almost every fight where he wants it and seems to be getting more and more confident as his resume continues to stack up.

Blaydes should win this fight given the size advantage and cruises to a decision victory.