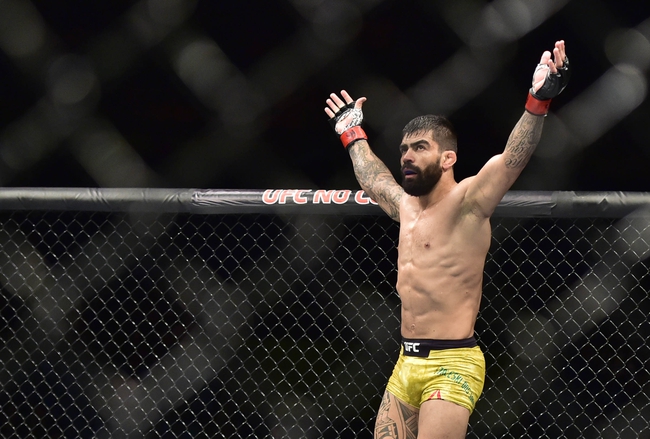 Elizeu Zaleski dos Santos enters this fight with a 21-5 record and has won 67 percent of his fights by knockout. dos Santos has won each of his last seven fights and is coming off a March win over Curtis Millender. dos Santos is averaging 4.27 significant strikes per minute with an accuracy percentage of 41 percent. dos Santos is averaging 0.53 takedowns with an accuracy percentage of 15 percent. dos Santos is coming off an impressive first round submission victory, the second of his career, and he’s now produced finishes in each of his last three fights. dos Santos hasn’t lost since his 2015 bout against Nicolas Dalby and he’s 7-1 under the UFC banner. dos Santos is a striker at heart who relies on rapid combinations and elite athleticism, as few fighters in this sport are as effective with their legs and knees as he is. dos Santos has a variety of strikes in his tool box, and his opponent must be prepared for anything, as a flying knee or a spinning kick could come at any moment. What’s crazy about dos Santos is that he’s never been knocked out in his career despite his fighting style and the fact he can be a bit wild, leaving himself open for counters. dos Santos has only been finished twice in his career, both via the rear-naked choke, but that hasn’t taken place in over six years. This will be Zaleski dos Santos’ first career fight in China.

Li Jingliang enters this fight with a 16-5 record and has won 38 percent of his fights by knockout. Jingliang has won six of his last seven fights and is coming off a November win over David Zawada. Jingliang is averaging 5.01 significant strikes per minute with an accuracy percentage of 43 percent. Jingliang is averaging 1.14 takedowns with an accuracy percentage of 33 percent. Jingliang is coming off a third round knockout kick to the body that earned him performance of the night honors at UFC Fight Night 141, and he’s now produced knockouts in five of his last seven victories. Jingliang is now 8-3 under the UFC banner and he’s earned bonuses in four of his last five fights. Jingliang is an explosive fighter with a background in Sanshou and and brown belt in BJJ. Jingliang lands powerful, accurate punches, is aggressive with his takedowns and is experienced enough in wrestling that’s helped him produce five career submission victories. Jingliang is a well conditioned fighter who has good technique to his standup and good head movement that’s allowed him to never get finished on his feet. This will be Jingliang’s 13th career fight in China, his birthplace.

This is a fight where Jingliang will have a chance, as Zaleski will allow him to fight standing up and will engage with wild shots, leaving an opening for a counter or a crazy head kick. This has a chance to be an absolute bloodbath between two guys who have entertaining styles and aren’t afraid to go to war with bombs. With that said, Zaleski has been too consistent lately, and I have a hard time betting against him when he’s going to get the style of fight he wants. Zaleski is also the bigger fighter in this bout with a reach advantage, which could be the tipping point. You could make a case for either fighter here in what will likely earn a performance bonus of some sort, but Zaleski is the bigger, more powerful fighter and has been on an absolute tear as of late.

Zaleski wins, but I’ll be interested to see what the line price is.

Randy’s Pick Elizeu Zaleski (Will update when odds are released)