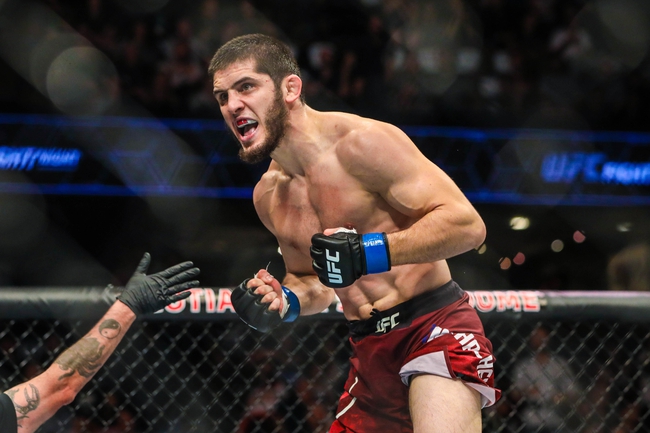 Islam Makhachev enters this fight with a 17-1 record and has won 41 percent of his fights by submission. Makhachev has won each of his last five fights and is coming off an April win over Arman Tsarukyan. Makhachev is averaging 2.24 significant strikes per minute with an accuracy percentage of 61 percent. Makhachev is averaging 4.33 takedowns with an accuracy percentage of 87 percent. Makhachev is coming off a decision victory that earned fight of the night honors, his first performance bonus of his UFC career. Makhachev is now 6-1 under the UFC banner and is somebody who is quietly moving up the lightweight division and could eventually get a title shot if he stays on this path. Makhachev has a background in sanshou, judo and sambo, so he’s highly effective in close range, is relentless with his takedown attempts and almost always has the edge on the canvas. Makhachev grew up with Khabib Nurmagomedov, and they often train together, so it’s no surprise he has a similar fighting style and wants to drag his opponent into deep waters. However, Makhachev has landed 44 precent of his strikes standing up and he does have three career knockouts, so don’t sleep on his striking ability. This will be first Makhachev’s career fight in Abu Dhabi.

Davi Ramos enters this fight with a 10-2 record and has won 70 percent of his fights by submission. Ramos has won six of his last seven fights and is coming off a May win over Austin Hubbard. Ramos is averaging 3.12 significant strikes per minute with an accuracy percentage of 38 percent. Ramos is averaging 3.28 takedowns with an accuracy percentage of 58 percent. Ramos has won each of his last four fights since his decision loss to Sergio Moraes at UFC Fight Night 106. This is a big test for Ramos and a chance for him to breakthrough the UFC rankings and gain far more attention. Ramos is a 2015 ADCC Champion, so his grappling is top notch and his strong upper body allows him to gain control in the clinch and take the fight where he wants it. While his bang round is grappling and ground game, Ramos also has a decent standup where he has strong leg kicks and enough power in his hands that has to be respected. Ramos has never been finished in his career and each of his last nine fights have ended in submission or decision. This is a chance for Ramos to prove he’s capable of going toe-to-toe with the better fighters within the division. This will be first Ramos’ career fight in Abu Dhabi.

Ramos is a very underrated fighter and I strongly considered backing him in the underdog role. He not only would have the edge standing up in this fight, but his grappling background and ground game overall makes me think he can hang with Makhachev and give him a run for his money. With that said, fights are often won by the fighter who gets the style he wants and is most comfortable, and while Ramos is game for three rounds on the canvas, it’s Makhachev who lives for these situations and never loses once on the canvas.

Ramos can make this fight competitive and could force a tight decision, but picking against Makhachev in a bout where he’s likely going to get his style of fight just doesn’t make much sense to me.