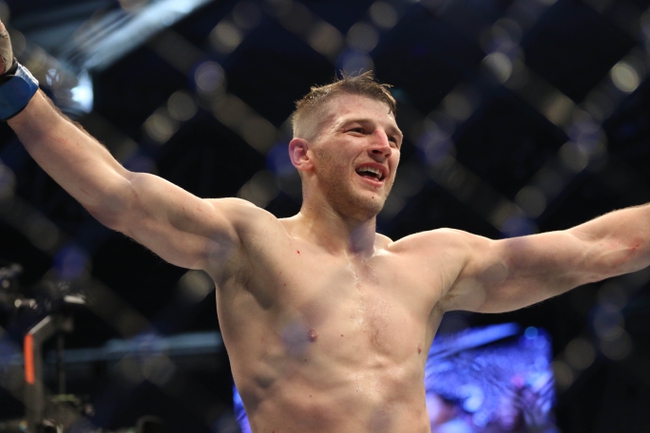 UFC on ESPN+ 26 Click Here for the Latest Odds

Paul Felder enters this fight with a 17-4 record and has won 59 percent of his fights by knockout. Felder has won five his last six fights and is coming off a September win over Edson Barboza. Felder is averaging 3.53 significant strikes per minute with an accuracy percentage of 43 percent. Felder is averaging 0.32 takedowns with an accuracy percentage of 33 percent. Felder is coming off another tight decision victory that could have gone either way, but he did a fine job of working the entire body and being accurate with his strikes throughout three rounds. Felder has seen each of his last three fights go to the judges. Felder is what he is at this stage of his career, as he's a striker at heart who is creative, mixes in leg kicks well and has some power in his hands. Felder is a pressure fighter who likes to dictate pace and keep his opponent uncomfortable with his high work rate. Whether he's standing up, in the clinch or executing ground and pound, Felder usually outworks his opponent and has been finished just once in four career losses. A tough creative fighter, Felder can bang with just about anybody within this division and is going to put on a show win, lose or draw. This will be Felder’s first career fight in New Zealand.

Dan Hooker enters this fight with a 19-8 record and has won 50 percent of his fights by knockout. Hooker has won six of his last seven fights and is coming off an October win over Al Iaquinta. Hooker is averaging 4.35 significant strikes per minute with an accuracy percentage of 43 percent. Hooker is averaging 0.47 takedowns with an accuracy percentage of 37 percent. Hooker has put together back-to-back victories since that tough loss to Edson Barboza, and he’s fresh off his first decision in three years. Seven of Hooker’s last nine fights have been stoppages for better of for worse. Hooker has become one of the more exciting fighters due to the way the bouts end, and he’s one of the best volume strikers in the lightweight division overall. Hooker lands 84 percent of his strikes standing up and 70 percent of his significant strikes are at the head area. With a kickboxing background, it’s no secret where Hooker is most comfortable, but he also has seven submission wins to his name and is slippery in the clinch, so he’s far from a one-trick pony and can more than hold his own on the canvas. Hooker has three career wins via the guillotine choke. This will be Hooker’s ninth career fight in New Zealand, his birthplace.

This should be one of the more competitive fights we’ve seen this year, and you can make a strong case for either side. Felder is as tough as they come and has a coming forward style that usually wears down opponents. Hooker is a balanced striker who probably has the power advantage and will be fighting in front of his home fans for the first time since UFC Fight Night 110. If forced to pick this fight, I’d lean toward Hooker getting his hand raised. Hooker looked really impressive in his victory over AI and appears to be somebody who is starting to put everything together at 30 years old. Felder is a tough dude who isn’t going down easily, but Hooker has the momentum, the crowd behind him and more variety in his strikes to edge this one out in what should be a standup brawl.

Give me Hooker in the main event.