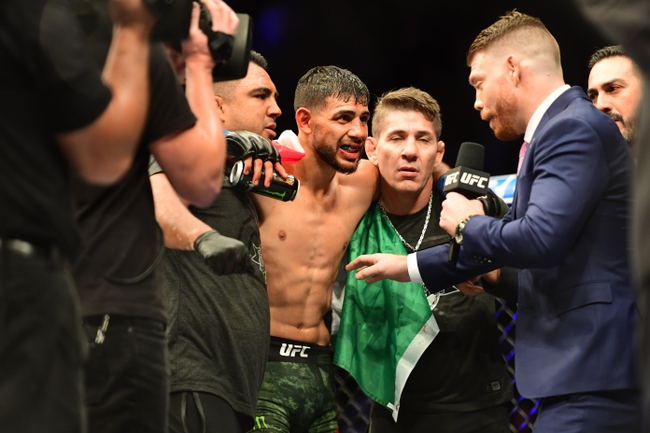 Yair Rodriguez enters this fight with a 11-2 record and has won 45 percent of his fights by decision. Rodriguez has won nine of his last 10 fights and is coming off a November win over Chan Sung Jung. Rodriguez is averaging 4.06 significant strikes per minute with an accuracy percentage of 43 percent. Rodriguez is averaging 1.02 takedowns with an accuracy percentage of 33 percent. Rodriguez is coming off a highlight reel fight where he landed a last-second elbow when dodging a flurry of strikes. It was part creativity, part luck and Rodriguez will certainly take it however you feel about it, as he was probably going to lose the fight on the cards if that elbow didn’t land. Either way, Rodriguez has earned performance bonuses in four of his last five fights and has lost just once in the last six years. Rodriguez is quite an athlete and likes to pressure his opponents with a variety of strikes and three of his last four victories have been knockouts. Rodriguez can be a bit wild at times and does have holes in his defense, but he’s creative and always in the fight due to a variety of attacks. Rodriguez has also improved his takedown percentage lately, so his ground game can’t go unnoticed as well. This will be Rodriguez’s seventh career fight in Mexico, his birthplace.

Jeremy Stephens enters this fight with a 28-16 record and has won 68 percent of his fights by knockout. Stephens has split his last 16 fights and is coming off a March loss to Zabit Magomedsharipov. Stephens is averaging 3.08 significant strikes per minute with an accuracy percentage of 40 percent. Stephens is averaging 1.11 takedowns with an accuracy percentage of 36 percent. Stephens is kind of in a must-win situation, as he’s lost seven of his last 12 fights and hasn’t won overall since UFC on Fox 28. Given the hit or miss results, it’s fair to question why Stephens is even headlining a main event, even if three of his last eight bouts have earned fight of the night honors. Stephens hopes to avoid three straight losses for the first time since 2011-12. Stephens is an aggressive fighter who throws a lot of strikes and can take a beating when he gets into these brawl style fights. Stephens has only been knocked out twice in his career despite 16 losses, and that’s rather impressive given his fighting style. Stephens has very heavy hands and can end things quickly with a haymaker, and 10 of his 19 career knockouts have ended in the first round. Stephens is a good grappler with 27 takedowns on the UFC level, but he has lost 11 of his 18 career decisions. This will be Stephens’ first career fight in Mexico.

Stephens could certainly win this fight with his power striking, and Rodriguez has had issues against grizzly veterans in the past. The reason I’m still backing Rodriguez is because he’s the bigger, longer fighter with athleticism on his side and he should be used to the conditions this arena brings given he’s from Mexico. This arena is 7,200 feet above sea level, so conditioning is going to play a key role and we could very well see the American gas out rather quickly. As long as Rodriguez can survive an early power strike, he should do work in the later rounds and squeeze out a victory.

I have Rodriguez in this toss-up fight.