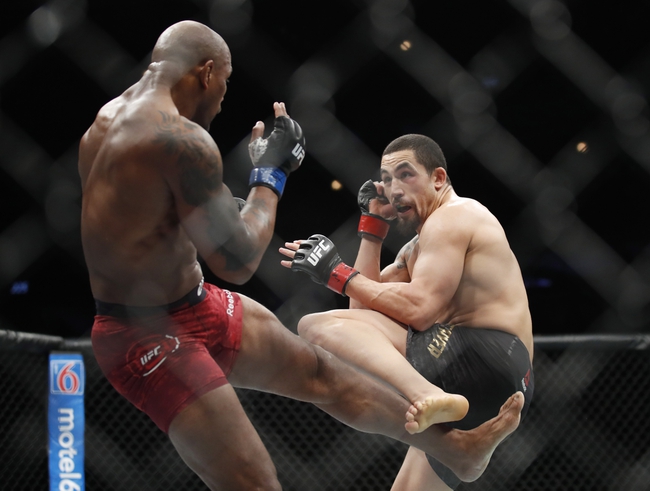 Yoel Romero and Paulo Costa fight Saturday during UFC 241 at the Honda Center.

Yoel Romero enters this fight with a 13-3 record and has won 85 percent of his fights by knockout. Romero has won six of his last eight fights and is coming off a June (2018) loss to Robert Whittaker. Romero is averaging 3.32 significant strikes per minute with an accuracy percentage of 51 percent. Romero is averaging 1.98 takedowns with an accuracy percentage of 36 percent. Romero is coming off a controversial split decision loss, as he landed more strikes at a much higher percentage throughout five rounds and even produced a few takedowns. Romero now hopes to avoid back-to-back losses for the first time in his career and has been outside of the octagon for more than a year for the first time since his 2011 loss to Rafael Cavalcante. At 42 years old, Romero is still a highly effective fighter who is accurate with his hands and one of the more decorated wrestlers in the sport. Romero usually gets the fight where he wants it and has a nasty ground and pound. Few want to be on the canvas with the Soldier of God given his lengthy wrestling background, even though none of his fights have ended in submission. Romero is also still quite athletic for his age and is creative with his strikes, which includes a flying knee or an elbow out of the clinch. This will be Romero’s second career fight in California.

Paulo Costa enters this fight with a 12-0 record and has won 92 percent of his fights by knockout. This will be Costa’s second fight since 2018 and he’s coming off a July (2018) win over Uriah Hall. Costa is averaging 8.83 significant strikes per minute with an accuracy percentage of 59 percent. Costa is averaging zero takedowns with an accuracy percentage of zero percent. Costa is coming off a second round knockout victory in UFC 226 that earned him performance of the night, and he’s now knocked out each of his last four opponents. Costa is just a freak of nature who throws every strike with the intention to hurt his opponent, and he has good variety to his strikes. Costa has legit knockout power in both hands, but he also has a many different kicks that he loves to unleash and will take full advantage of any defensive weakness. Costa is always pressing the issue offensively and usually looks to back his opponent against the cage where he can capitalize off the lack of movement. The only thing that’s still a question mark with Costa is the ground game, but he’s defended takedowns well up to this point. This will be Costa’s third career fight in the United States.

This could be the best fight on the card when you consider both of these guys ability to finish fights and the power they throw with. Costa has value as an underdog, but he’s never fought somebody with the experience and balance of Romero, and this could be the bout where he has to prove he can tap into his wrestling bag and survive on the canvas. Romero also isn’t going to be overwhelmed by Costa’s aggressiveness and he’s too polished to get caught against the canvas. His movement will be key in this fight. I just have too much respect for Romero to think he’ll make the same mistakes past fighters have made against Costa.

I like Romero to give Costa his first career loss.