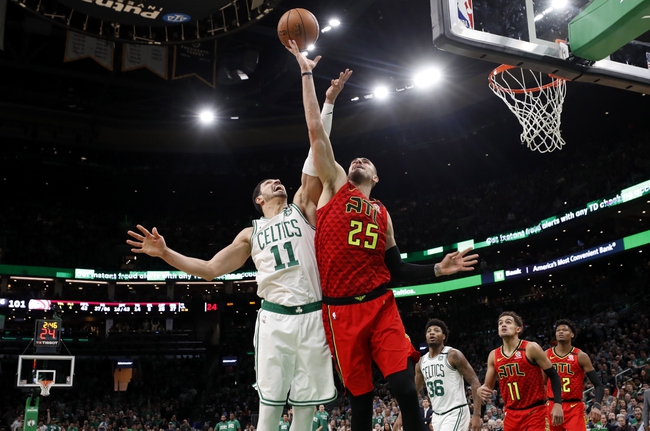 After the win against Philadelphia, Boston is now 33-15 on the season and is currently in 2nd place in the Atlantic Division.  Kemba Walker has been the leading scorer so far this season for Boston as he has scored an average of 22 points per game.  Walker is also the leader in assists for the Celtics as he has averaged 5 per game.  The leading rebounder for Boston is Enes Kanter who has recorded 8.2 rebounds per game so far on the season.  The Celtics enter Monday’s game with 2 player listed on their injury report as Kemba Walker is day to day while Enes Kanter is out.

The Atlanta Hawks welcome the Boston Celtics to town on Monday, just looking for something to be positive about this season.  In their last game, Atlanta was defeated by the Dallas Mavericks by the score of 123-100.  John Collins led the Hawks in points against the Mavericks, scoring 26 points while shooting 11 of 20 from the field and 3 of 5 from the free throw line. Jeff Teague led the Hawks in assists with 8 while playing 30 minutes in the game.  Damian Jones led Atlanta in rebounds as he pulled in 12 on the night, including 1 offensively.

After the loss to Dallas, Atlanta is now 13-37 on the season and is currently in 5th place in the Southeast Division.  Trae Young leads the Hawks in points per game on the year and is scoring 29 per game.  Young is also Atlanta’s leader in assists per game and is averaging 9.  Alex Len is leading Atlanta in rebounds per game on the season as he is averaging 5.8 rebounds per game.  Atlanta enters their game on Monday with 5 players listed on their injury report as Bruno Fernando, De’Andre Hunter, Cam Reddish and Trae Young are day to day while DeAndre’ Bembry is out.