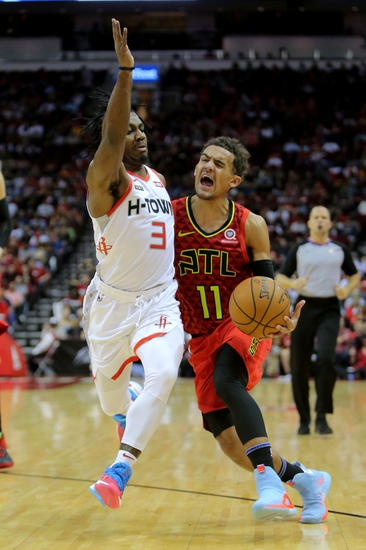 The Houston Rockets head to Atlanta, GA on Wednesday for a game against the Hawks in a matchup of teams from the Western and Eastern Conference.  In their last game the Rockets defeated the Philadelphia 76ers by the score of 118-108.  James Harden led the Rockets in scoring on the night as he recorded 44 points while shooting 13 of 24 from the field and 12 of 12 from the free throw line.  Harden also led the Rockets in assists on the night with 11 while playing a total of 41 minutes against the 76ers.  Clint Capela led Houston in rebounds on the night with 14, including 3 coming offensively.

With the win in their last game, the Houston Rockets are now 24-11 and are currently in 1st place in the Southwest Division.  James Harden is Houston’s leading scorer and is scoring 38.4 points per game and is always a threat to shoot. Harden is also the Rockets leader in assists per game with 7.6.  Center Clint Capela is the leading rebounder for the Rockets as he has averaged 14.2 rebounds per game, including an average of 3.9 per game while on offense.  The Rockets come into Wednesday’s game with 2 players listed on their injury report as Gerald Green is listed as out while Russell Westbrook is day to day.

The Atlanta Hawks welcome the Houston Rockets to town on Wednesday, just looking for something to be positive about this season.  In their last game, Atlanta was defeated by the Denver Nuggets by the score of 123-115.  Trae Young led the Hawks in points against the Nuggets, scoring 29 points while shooting 8 of 12 from the field and 9 of 9 from the free throw line. Young also led the Hawks in assists with 12 while playing 39 minutes in the game. Kevin Huerter led Atlanta in rebounds as he pulled in 8 on the night, including 2 offensively.

After the loss to Denver, Atlanta is now 8-29 on the season and is currently in 5th place in the Southeast Division.  Trae Young leads the Hawks in points per game on the year and is scoring 28.9 per game.  Young is also Atlanta’s leader in assists per game and is averaging 8.4.  Jabari Parker is leading Atlanta in rebounds per game on the season as he is averaging 6 rebounds per game.  Atlanta enters their game on Wednesday with 2 players listed on their injury report as Bruno Fernando is listed as day to day while Jabari Parker is listed as out.