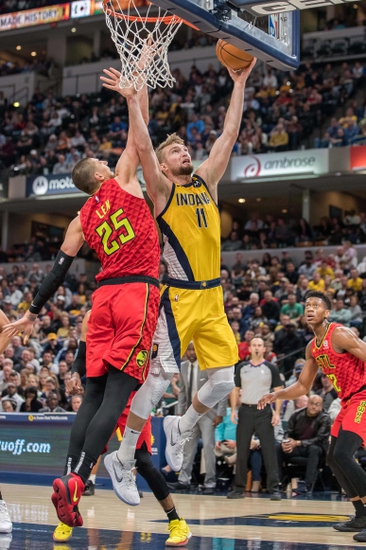 The Indiana Pacers head to Atlanta, Georgia on Friday in a for a game against the Hawks in a battle between 2 teams from the Eastern Conference.  In their last game, the Pacers defeated the Boston Celtics by the score of 122-117.  Malcolm Brogdon led the Pacers in points with 29, while shooting 6 of 10 from the field and 15 of 15 from the free throw line. Brogdon also led the Pacers in assists on night with 8 while playing a total of 29 minutes against the Celtics.  Domantas Sabonis led Indiana in rebounds in the game with 14, including 2 coming offensively.

With the win against Boston, Indiana moved to 16-9 on the season which places them in 2nd place in the Central Division.  Malcolm Brogdon leads the Pacers in points per game and is scoring 19.5 points per game. Brogdon also leads the Pacers in assists per game with an average of 7.5.  Domantas Sabonis has led the Pacers in rebounds per game so far this season as he has averaged 13.5 per game.  Indiana enters Friday’s game with 2 players listed on their injury report as Brian Bowen II is listed as day to day while JaKarr Sampson is listed as out

The Atlanta Hawks welcome the Indiana Pacers to town on Friday, just looking for something to be positive about this season.  In their last game, Atlanta was defeated by the Chicago Bulls by the score of 136-102.  Alex Len led the Hawks in points against the Bulls, scoring 17 points while shooting 7 of 9 from the field and 2 of 4 from the free throw line.  Jabari Parker led Atlanta in rebounds as he pulled in 7 on the night, including 2 offensively.  Trae Young led the Hawks in assists as he recorded 13 in the 32 minutes that he played against the Bulls.

After the loss to Chicago, Atlanta is now 6-19 on the season and are currently in 5th place in the Southeast Division.  Trae Young leads the Hawks in points per game on the year and is scoring 27.9 per game.  Young is also Atlanta’s leader in assists per game and is averaging 8.6.  Jabari Parker is leading Atlanta in rebounds per game on the season as he is averaging 6.4 rebounds per game.  Atlanta enters their game on Friday with a clean bill of health as they do not have anyone listed on their injury report.