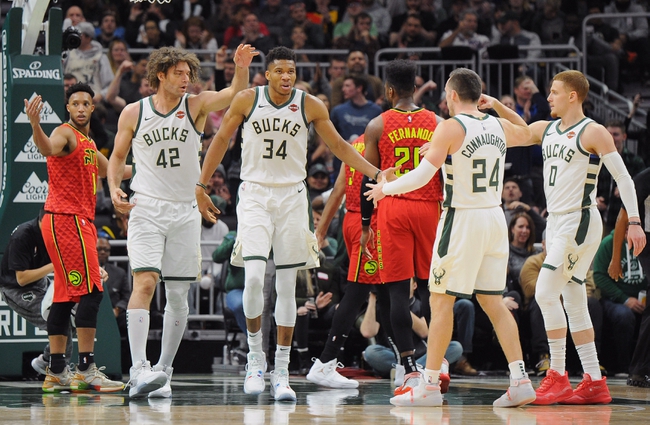 The Milwaukee Bucks head to Atlanta, Georgia on Friday for a game against the Hawks in a matchup of two teams at opposite ends the Eastern Conference.  In their last game, Milwaukee was defeated by the Philadelphia 76ers by the score of 121-109.  The Bucks were led in points by Khris Middleton who scored 31 points on the night while shooting 12 of 21 from the field and 2 of 2 from the free throw line. Giannis Antetokounmpo led Milwaukee in rebounds with 14, including 2 coming offensively.  Antetokounmpo also led the Bucks in assists on the night with 7 while playing a total of 30 minutes against the 76ers.

On the year, the Milwaukee Bucks are now 27-5 and are currently in 1st place in the Central Division.  Giannis Antetokounmpo leads the Bucks in points per game with 30.5 and in rebounds per game with 12.9.  Antetokounmpo also leads the Bucks in assists per game as he has averaged 5.7 so far this season.  The Bucks enter Friday’s game against the Hawks with 1 player listed on their injury report as Dragan Bender is listed as out.

The Atlanta Hawks welcome the Milwaukee Bucks to town on Friday, just looking for something to be positive about this season.  In their last game, Atlanta was defeated by the Cleveland Cavaliers by the score of 121-118.  Trae Young led the Hawks in points against the Cavaliers, scoring 30 points while shooting 9 of 21 from the field and 7 of 9 from the free throw line. Young also led the Hawks in assists with 11 while playing 36 minutes against the Cavaliers. John Collins led Atlanta in rebounds as he pulled in 10 on the night, including 1 offensively.

After the loss to Cleveland, Atlanta is now 6-25 on the season and is currently in 5th place in the Southeast Division.  Trae Young leads the Hawks in points per game on the year and is scoring 29 per game.  Young is also Atlanta’s leader in assists per game and is averaging 8.5.  Jabari Parker is leading Atlanta in rebounds per game on the season as he is averaging 6.1 rebounds per game.  Atlanta enters their game on Friday with 3 players listed on their injury report as Jabari Parker, Evan Turner and Alex Len are all listed as day to day.