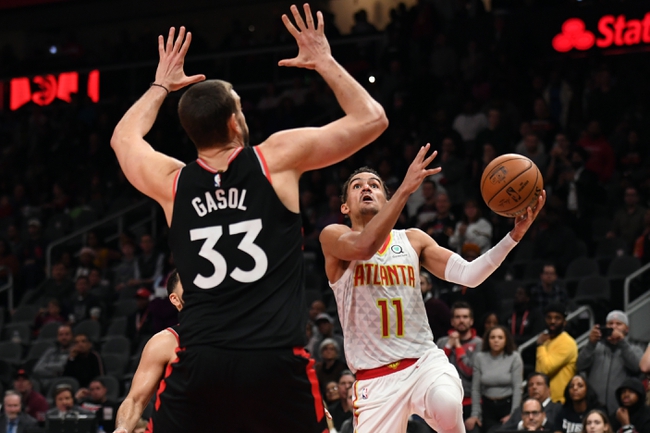 One of the NBA’s worst defenses will take on one of the league’s best offenses on Monday when the Minnesota Timberwolves (8-8) travel to State Farm Arena in Atlanta to face the Hawks (4-12). Atlanta’s defense has been appalling so far this season, ranking No. 26 in the NBA allowing 117.7 points per game, while Minnesota, despite a rash of injuries, still ranks ninth in the league scoring 113.4 points per game.

Much of the reason Minnesota has been able to keep up its scoring prowess despite all of its injuries are Karl-Anthony Towns and Andrew Wiggins. Towns is averaging 26.4 points and 12.4 rebounds per game while Wiggins adds 25.2 points per game for the Timberwolves. Towns’ scoring average is seventh-best in the NBA and he is sixth in rebounds per game, while Wiggins ranks 14th in scoring. That type of scoring, joined with Jeff Teague’s 13.2 points and 7.7 assists per game, Robert Covington’s 12.9 points per game, and Jake Layman’s 10.5 points per game has kept Minnesota among the elite offensive teams in the NBA.

But the injuries have taken their toll and have kept the Timberwolves from seeing any sort of consistency. In its 100-98 loss to Phoenix, Minnesota played without Shabazz Napier, Josh Okogie, Treveon Graham, and Layman due to injury, and Covington missed for personal reasons. These injuries have led to four losses in the last five games after the Timberwolves had jumped out to a 7-4 record through Nov. 13.

In the loss to the Suns, Devin Booker had a massive game, scoring 35 points with 12 rebounds and nine assists while Kelly Oubre Jr. added 25 points and 11 rebounds. That type of output from Atlanta’s Trae Young will spell trouble for Minnesota. Towns and Wiggins were brilliant as always, with Towns leading his team with 31 points and 17 rebounds and Wiggins scoring 21 points before fouling out. Keita Bates-Diop added 22 points off the bench in the loss.

While Minnesota has struggled to find consistency this year, Atlanta has been very consistent -- consistently bad, that is. The Hawks are currently on a six-game losing streak, have lost nine of their last 10, and 12 of their last 14. Remember, Atlanta started the season at 2-0 and have followed by going 2-12 with some blowout losses along the way, including a 49-point blowout at the LA Clippers on Nov. 16 in a game that Kawhi Leonard didn’t play.

The one thing that Atlanta has been able to depend on all year is Young. He has led his team in scoring 10 times in 16 games and has scored more than 30 points seven times this season. He is leading the team and is the 10th-best scorer in the NBA averaging 25.9 points while his 8.7 assists per game this year rank third in the NBA. John Collins adds 17.0 points and 8.8 rebounds per game, Jabari Parker scores 16.6 points per game, and De’Andre Hunter adds 12.5 points per game.

But as their most recent loss to Toronto shows, the Hawks’ problem is not on offense, it is on defense. Atlanta was able to score with Young recording a triple-double scoring 30 points with 10 rebounds and 10 assists, while Hunter scored 26, Parker scored 13 with seven rebounds, five assists, and three steals, and DeAndre’ Bembry added 11. But the Hawks allowed Pascal Siakam to score 34 points while Fred VanVleet added 25 and Norman Powell scored 20 for the Raptors and the inability to slow down Toronto cost Atlanta a chance at a win.

Neither team is good against the spread but both Atlanta and Minnesota have had nine of their 16 games go over the total. Minnesota is a team that can score on anyone, and Atlanta is a team that can score but cannot stop anyone on defense. With the Timberwolves' injuries wreaking havoc with their defense, it appears that taking the over is the way to go here. This will be a fun game to kick back and watch Young, Towns, and Wiggins score early and often for a 125-120 game and an easy cover.