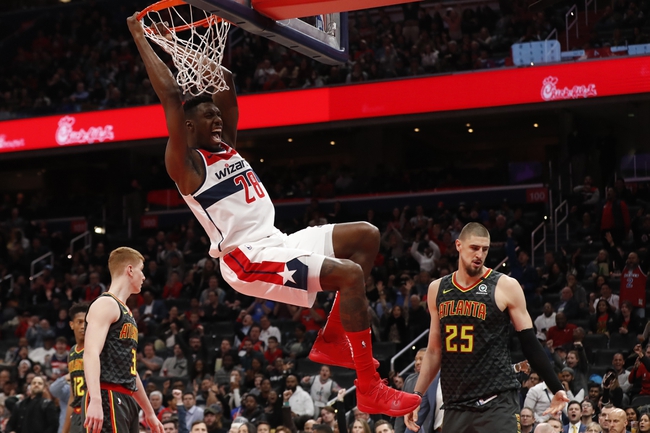 In the Wizards win over the Cavaliers, Washington was guided on offense by Bradley Beal.  Beal collected 36 points, 2 rebounds, and 8 assists.  The Wizards shot 55% from the floor and 44% from 3-point range.  Washington won the game from behind the 3-point arch.  The Wizards connected 16 times from long range, while Cleveland made 11.  The Wizards trailed by 12 points in the game.

In the Hawks loss to the Thunder, Atlanta was led throughout the game by Trae Young.  Young secured a double-double, totaling 26 points and 16 assists.  The Hawks shot 46% from the floor and 31% from 3-point range.  The Hawks were out rebounded, 45 to 37.  Atlanta put Oklahoma City at the foul line 34 times, watching the Thunder connect 26 times.  The Hawks had a assist to turnover ratio of 24 to 11.

Wizards are 12-6 SU in their last 18 games against the Hawks.

Wizards are 4-2 ATS in their last 6 Eastern Conference games.

Hawks are 2-13 SU in their last 15 Eastern Conference games.

The Wizards have split their last 4 games, while the Hawks have gone just 1-3 in their last 4.  Both teams have struggled overall on the season, but the Wizards haven't had trouble scoring.  Washington has the 5th highest scoring offense, but have been giving up just as many as they are scoring.  Washington is giving up nearly 120 per game.  The Hawks have been nearly as bad on defense, ranking 28th in scoring defense.  Due to both defense's being generous, this total is high.  However, I think this total is to high, I'll take the under here.  Final score prediction, Wizards will win and the total goes under, 118-114.