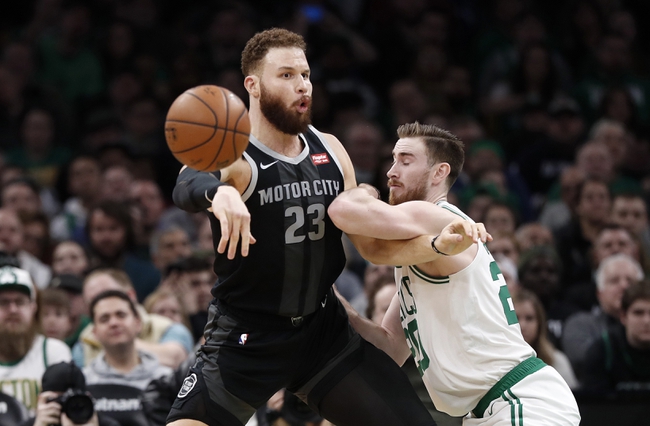 The Detroit Pistons head to Boston, MA on Friday for a game against the Celtics in a matchup of two teams from the Eastern Conference.  In their last game, the Pistons were defeated by the Toronto Raptors by the score of 112-99.  Andre Drummond led the Pistons in points with 22 while shooting 9 of 16 from the field and 4 of 7 from the free throw line. Drummond also led the Pistons in rebounds in the game, pulling in 18 boards with 6 coming offensively.  Derrick Rose led Detroit in assists against the Raptors, recording a total of 5 while playing 28 minutes in the game.

The Boston Celtics welcome the Detroit Pistons to town on Friday after winning their last game against the Dallas Mavericks by the score of 109-103.  Kemba Walker led the Celtics in points in the game with 32 while shooting 9 of 18 from the field and 9 of 11 from the line.  Walker also led Boston in assists in the game with 3 while playing a total of 36 minutes in the game.  Enes Kanter was the leader in rebounds for the Celtics in their game against the Mavericks as he pulled in 13 rebounds with 7 coming offensively.

After the win against Dallas, Boston is now 18-7 on the season and is currently in 1st place in the Atlantic Division.  Kemba Walker has been the leading scorer so far this season for Boston as he has scored an average of 23.5 points per game.  Walker is also the leader in assists for the Celtics as he has averaged 5.2 per game.  The leading rebounder for Boston is Jaylen Brown who has recorded 7 rebounds per game so far on the season.  The Celtics enter Friday night’s game with 5 players listed on their injury report as Gordon Hayward and Brad Wanamaker are listed as day to day while Robert Williams III, Vincent Poirier and Marcus Smart are listed as out.

The pick in this article is the opinion of the writer, not a Sports Chat Place site consensus.
Previous Pick
Indiana Pacers vs. Sacramento Kings - 12/20/19 NBA Pick, Odds & Prediction
Next Pick
Philadelphia 76ers vs. Dallas Mavericks-12/20/19, NBA, Odds, Pick, & Prediction