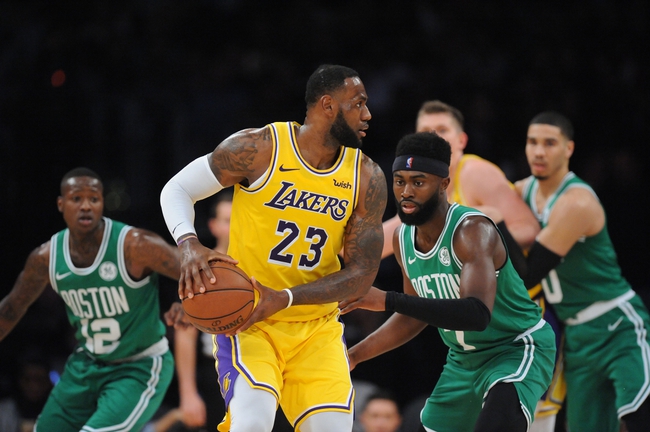 In the Lakers win over the Rockets, Los Angeles was led on offense by LeBron James.  James registered a double-double, finishing with 31 points, 12 assists, and 5 rebounds.  The Lakers shot 48% from the floor and 33% from 3-point range.  Los Angeles trailed at halftime by 6, but used a huge 3rd quarter to tae the lead.  The Lakers finished the game with an assists to turnover ratio of 25 assists to 17 turnovers.

In the Celtics loss to the Suns, Boston was guided offensively by Marcus Smart.  Smart drilled 11 3-pointers in the game, finishing with 37 points, 5 rebounds, and 8 assists, while collecting 4 steals.  The Celtics shot 44% from the floor and 36% from distance.  Boston lost the game, due to being out scored from the charity stripe, 26 to 20.  The Celtics were out rebounded, 52 to 39, while 10 of those Phoenix rebounds were offensive.

Celtics are 6-3 ATS in their last 9 games against the Western conference.

The Lakers have been tremendous on the road this season, posting an 18-3 record.  The Celtics are 16-5 at home this season.  The Celtics have won 6 of the last 10 matchups in this series.  Both defense's have been great this year, as each team is allowing less than 106 per game.  This should be a back and forth game, but I like the lakers to get the job done on the road, as Kemba Walker and Jaylen Brown are both questionable and may not be 100% even if both play.  Final score prediction, Lakers will win and cover, 112-108.