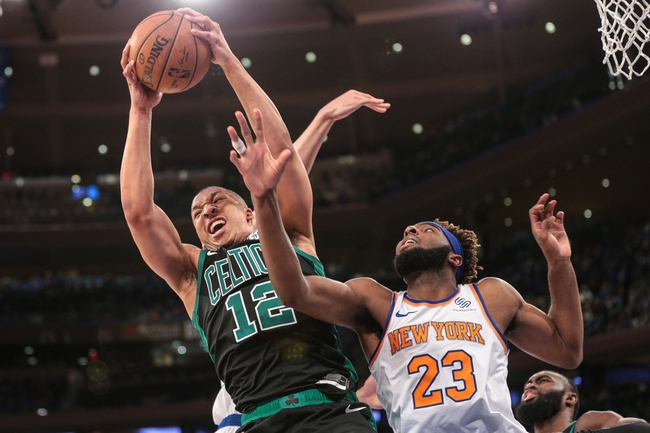 The New York Knicks head into a road matchup with the Boston Celtics.  The Kicks are (1-4) on the season and are coming off a road loss to the Orlando Magic, 95-83.  The Boston Celtics enter this matchup with a record of (3-1) and last played the Milwaukee Bucks.  The Celtics beat the Bucks 116-105.

The Celtics over came a 15 point deficit after the first quarter en route to the victory.  The Celtics were led by Kemba Walker with 32 points.  Walker was a excellent 14 of 15 from the foul line.  Gordon Hayward contributed a double-double in the game, scoring 21 points and pulling down 10 rebounds.  The Celtics shot a cool 41.5% clip from downtown.  The Celtics forced 15 turnovers on the way to the win.  The Celtics pulled away by out scoring the Bucks 38 to 18 in the 3rd quarter.

Knicks are 4-1 ATS in their last 5 games following a loss.

Knicks are 1-8 ATS in their last 9 Friday games.

Celtics are 6-2-1 ATS in their last 9 games following a win.

The Celtics have won 8 of the last 10 games in this series and are 6-3-1 ATS during that time.  The under is what strikes me when looking at this matchup.  The under has been very profitable in the last 4-5 games for both teams.  When looking at the head to head series, the under has gone 7-3 in the last 10.  The Celtics have had a pretty solid defense this year and the Knicks offense has been average at best.  Final score prediction, Celtics win and the total goes under, 108-101.