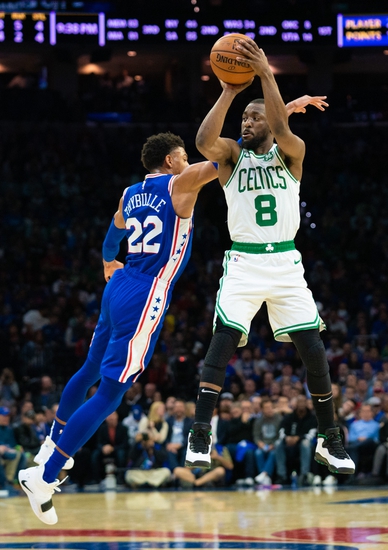 Since 2013, the Boston Celtics (0-1) have the best record against the spread in the NBA. Since 2007, the Toronto Raptors (1-0) have the highest percentage of games go over the total in the NBA. So just take the Celtics -2.5 and the over, parlay it, and be done with it, right?

Boston found itself in a playoff-type atmosphere to open the season in Philadelphia, only to come out on the losing end of a 107-93 decision that featured more than 60 fouls in the bruising affair. Kemba Walker struggled with the 76ers’ size and finished with only 12 points on 4-of-18 shooting. Gordon Hayward scored 25 points and Jayson Tatum completed a double-double with 21 points and 10 rebounds.

The Celtics struggled, though, against the athleticism and size of Philadelphia. Boston’s starters were a combined -53 when on the court and the team shot just 36.7 percent from the field, 26.9 percent from 3-point range, and 58.8 percent from the free throw line. Of course, most teams will struggle against the 76ers, who must be considered the top defensive team in the East (probably by a pretty big margin), and with one game being such a small sample size, it is difficult to figure whether these struggles will continue, or if it was just the nature of the beast playing Philly.

The defending champion Raptors (1-0), on the other hand, looked solid in a wide-open 130-122 overtime victory in Toronto to open their season against New Orleans. The Pelicans were without Zion Williamson, and the Raptors were without the man who carried them to the title last year, but Toronto was still able to show that it is definitely going to be able to score. Fred VanVleet scored a career-best 34 points, Pascal Siakam had a huge night with 34 points, 18 rebounds, and five assists, and Kyle Lowry chipped in with 22 points in the win.

Offensively, the Raptors were outstanding, no doubt about it. But defensively, it’s not quite the same story. This was not Anthony Davis leaving the charge for the Pelicans. This wasn’t even Williamson going off in his NBA debut. This was a balanced attack led by Brandon Ingram and JJ Redick. Sure, Ingram isn’t horrible, and Redick can hit some shots, but what Toronto faced was not Philadelphia. A more potent offense will certainly have a shot of putting up big numbers against this team.

And that brings it all back to this game and the Celtics getting a slight edge at -2.5. It’s not an enviable position that Boston is in, hoping for a big postseason run but possibly opening the season at 0-2. Considering that this will also be the Celtics’ home opener, they will get a push from the home fans. Walker isn’t going to hit just 4-of-18 shots from the field against Toronto and the Celtics are going to find things much easier going on the offensive end. Combine that with the fact that Toronto didn’t face the physical defense the Boston will certainly bring on Friday night, and all things seem to add up for the home team.

In terms of the parlay mentioned above? Well, it’s too tough to determine at this early in the season how much Toronto will regress when playing a defense like Boston, so avoiding the total is probably the best move despite the Raptor’s historic success going over.