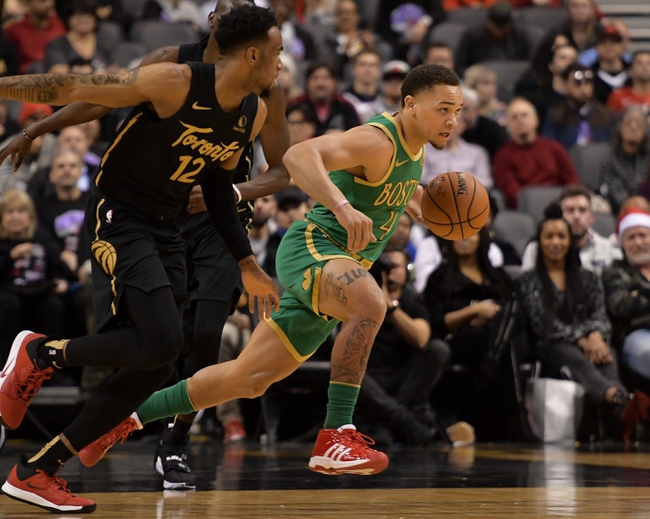 The Toronto Raptors are on the road for a matchup with the Boston Celtics.  The Raptors are (21-10), after falling Christmas morning to the the Celtics, 118-102.  The Celtics are (21-7), coming off the win against the Raptors.

In the Raptors loss to the Celtics, Toronto was led on offense by Fred VanVleet.  VanVleet connected on 11 of 21 attempts from the floor, making 3 foul shots, totaling 27 points.  Serge Ibaka contributed 12 points and 8 rebounds.  The Raptors shot over 47% from the floor and 35% from distance.  The Raptors got out worked on the boards, being out rebounded 55 to 39.  Toronto opened the game on a 10-0 run, but the Celtics quickly came back.

In the Celtics win over the Raptors, Boston was guided throughout the game by Jaylen Brown.  Brown converted on 10 of 13 attempts from the floor, making 5 of 6 from the charity stripe, finishing with 30 points and 6 rebounds.  Kemba Walker added 22 points and 4 assists.  The Celtics shot 50% from the floor and 42% from deep.  The Celtics trailed 10-0 early, but a timeout by coach Brad Stevens propelled Boston to take a run of their own.  The Celtics led by as many as 22 points.

The Celtics made it difficult for Toronto ever get back in the game in the 2nd half, as Boston would make a bucket right after Toronto would knock one down.  The Raptors were depleted inside and the Celtics took advantage at times.  The Raptors had to rely on VanVleet and Kyle Lowry from outside to keep them in the game.  Jayson Tatum struggled in the game, going just 5 of 18 from the floor.  Toronto is still without 3 key players in: Marc Gasol, Norman Powell, and Pascal Siakam.  I'll side with Boston again, as the Celtics are 12-1 at home.  Final score prediction, Celtics will win and cover, 109-102.

The pick in this article is the opinion of the writer, not a Sports Chat Place site consensus.
Previous Pick
Denver Nuggets vs. Memphis Grizzlies-12/27/19, NBA, Odds, Pick, & Prediction
Next Pick
Chicago Bulls vs. Atlanta Hawks - 12/28/19 NBA Pick, Odds & Prediction