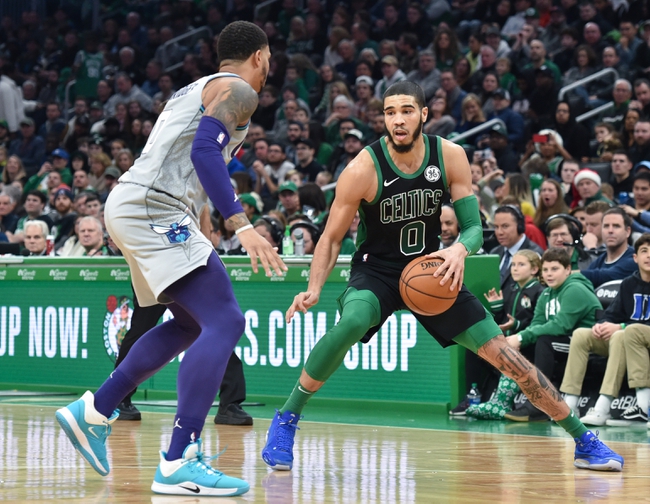 The Boston Celtics travel to Charlotte, North Carolina on Tuesday for a game against the Hornets in a game between two teams from the Eastern Conference.  In their last game, the Celtics lost to the Toronto Raptors by the score of 113-97.  Kemba Walker led the Celtics in points in the game with 30 while shooting 11 of 23 from the field and 5 of 6 from the free throw line. Jayson Tatum led Boston in assists in the game with 4 while playing a total of 36 minutes in the game.  Gordon Hayward was the leader in rebounds for the Celtics in their game against the Raptors as he pulled in 6 rebounds with 2 coming offensively.

After the loss against Toronto, Boston is now 22-10 on the season and is currently in 1st place in the Atlantic Division.  Kemba Walker has been the leading scorer so far this season for Boston as he has scored an average of 22.5 points per game.  Walker is also the leader in assists for the Celtics as he has averaged 5.2 per game.  The leading rebounder for Boston is Enes Kanter who has recorded 7.5 rebounds per game so far on the season.  The Celtics enter Tuesday’s game with 2 players listed on their injury report as Jaylen Brown is listed as day to day while Marcus Smart is listed as out.

The Charlotte Hornets welcome the Boston Celtics to town on Tuesday after losing their last game against the Memphis Grizzlies by the score of 117-104.  Malik Monk led the Hornets in scoring in the game as he scored 18 points while shooting 8 of 18 from the field and 1 of 2 from the free throw line. Miles Bridges led Charlotte in rebounds on the night with 7, with 2 coming offensively.  Devonte’ Graham led the Hornets in assists on the night as he recorded 10 while playing 35 minutes in the game against the Grizzlies.

After the loss to Memphis, the Charlotte Hornets are now 13-22 on the season which places them in 3rd place in the Southeast Division.  Devonte’ Graham has led the Hornets in points per game this season as he is averaging 19.1.  Graham also leads the Hornets in assists per game with 7.7.  Cody Zeller leads Charlotte in rebounds per game as he is averaging 7.6.  The Hornets enter Tuesday’s game with a clean bill of health as they do not have any players listed on their injury report

The Boston Celtics have scored an average of 111.5 points per game on the year while allowing 104.0 points per game.  The Charlotte Hornets have averaged 104.1 points per game this season while allowing 110.8 points per game.  In their last 5 games, the Celtics are 4-1 while the Hornets are 0-5.  The Celtics have won both meetings so far this season between the two teams by the scores of 108-87 and 119-93.  I am going to go with the Celtics to win this one as they have been a much better team than the Hornets all season and are 8-2 in their last 10 games against Charlotte.  I will also be looking for Boston to cover the spread in this one as Boston is 7-2 in their last 9 games against the spread when playing Charlotte.  Boston wins 115-95 and covers the spread.