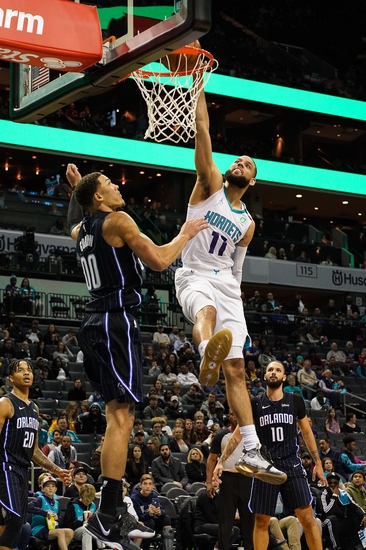 In the Magic loss to the Heat, Orlando was guided throughout the game by Nikola Vucevic.  Vucevic tallied 21 points, 9 rebounds, and 4 assists.  The Magic connected on 40% from the floor and 27% from 3-point range.  The Magic who have relied this season on their defense due to an inept offense, saw exactly that in this contest.  The Magic did struggled defensively aroud the perimeter, allowing Miami to connect 15 times from deep.

Magic are 4-10 ATS in their last 14 games against Charlotte.

The Magic have lost 5 in a row and 7 of their last 8 overall, while the Hornets have been nearly just as bad.  Charlottes has lost 9 of their last 10 overall.  Both offense's have struggled to get anything done this season, as the Magic rank 29th in scoring offense, while the Hornets rank 30th.  Defensively, the Magic have the best scoring defense, allowing less than 105 per contest.  Both teams have been bad over their last 10 games record wise.  This game has the feeling of the scoring getting off to a slow start.  Final score prediction, Magic will win and the total goes under, 102-96.