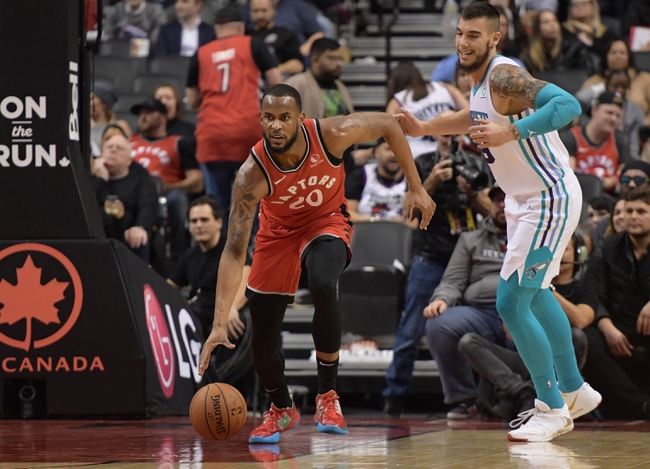 In the Raptors win over the Nets, Toronto was guided on offense by Fred VanVleet.  VanVleet converted on 11 of 19 field goals, hitting 2 foul shots, recording 29 points and 11 assists.  The Raptors shot 45% from the floor and 40% from distance.  Toronto forced 24 turnovers and secured 15 offensive rebounds, which helped the Raptors take a ridiculous 30 more shots than Brooklyn.  Toronto overcame a 16 point deficit in the win.

In the Hornets loss to the Pacers, Charlotte was led offensively by Terry Rozier.  Rozier connected on 8 of 17 attempts from the floor, hitting 9 foul shots, collecting 28 points and 6 assists.  The Hornets shot 46% from the floor and 33% from 3-point range.  Charlotte was smoked in the paint, being out scored 66 to 46.  Charlotte led by 2 points at the half.

The over is 21-18 in Hornets games this season.

The Raptors have split their last 6 games.  Toronto has had an injury list that has stayed consistent with: Marc Gasol, Norman Powell, and Pascal Siakam.  However, VanVleet has now been added to the list.  Charlotte has won 2 of their last 9 games.  The Raptors have a winning road record, having gone 10-7 thus far.  The Hornets are 7-12 at home this season.  The Hornets have one of the worse scoring offense's, ranking 28th at 104 per game.  The Raptors will make it difficult on the Hornets, as Toronto has the 4th best scoring defense.  I'll side with the Raptors to cover on the road.  Final score prediction, Raptors will win and cover, 111-105.